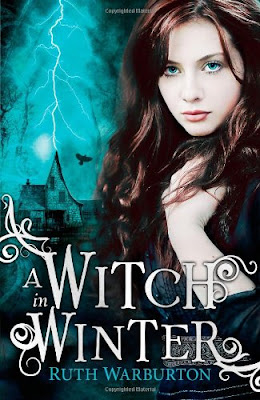 When love is tangled up in magic, how can you be sure what's real?

Anna Winterson doesn't know she's a witch and would probably mock you for believing in magic, but after moving to the small town of Winter with her father, she learns more than she ever wanted to about power.

Anna meets Seth, and is smitten, but when she enchants him to love her, she unwittingly amplifies a deadly conflict between two witch clans and splits her own heart in two.  She wants to love Seth, to let him love her - but if it is her magic that's controlling his passion, then she is as monstrous as the witch clan who are trying to use her amazing powers for their own gain.

Review:
Anna and her father have just moved from London to the coastal village of Winter for a fresh start after her father lost his job.  Although Anna wasn't happy about the move she actually settles in quite quickly and begins to make friends.  After a few drinks at a sleepover one night Anna's new friends think it would be a great idea to try out a love spell.  Anna is sceptical - she doesn't believe in magic - but she gets caught up in the fun and names Seth in a spell.  None of them are expecting anything to happen so Anna is shocked and horrified when Seth suddenly starts declaring his love for her.  No matter what she does she can't seem to reverse the spell though, in fact everything she tries just seems to make things worse and she is only drawing more attention to herself.  Just who are the group that are taking such an interest in her though and what do they really want with her?

I have to start by saying how much I loved the British feel to the story, anyone who has been to a coastal village will be able to picture the scenery perfectly and I loved the use of Brit slang throughout the novel.  I read a lot of books by American authors and as much as I enjoy them it is always nice to discover a story that is a set a little closer to home.  It was also nice to read a story about witches rather than the usual vampires and shape shifters, I'm not sure why but witches tend to be a lesser used supernatural character (well, in the books I've been reading anyway) so I'm always drawn to books I spot about them.

Anna is a great character and the thing I liked most about her was the fact that she is so normal, she is just your average teen who has moved to a new area and is trying to fit in and make friends.  We don't have to suffer too much teen angst though and she starts to make friends quite quickly.  Anna and her father are living in Wicker House, a creepy, run down, Gothic, old house in the middle of the woods and this makes a fab setting for the story.  The house is a character in it's own rights and it was very easy to visualise it, I'm not sure I'd want to live there though - well, not until it had been refurbished anyway!  Anna had no idea that she was a witch until the love spell goes wrong and I enjoyed watching her come to terms with her powers.  What I liked most was that she knew it was wrong to have Seth's interest purely because of a spell and she was determined to release him from it.

As far as Seth goes I really couldn't see her attraction for him at first, they had barely spoken and he didn't seem like a particularly nice guy at first.  I changed my mind towards the middle of the story though when Anna gets to know him better and they spend time talking, they obviously have things in common and found it easy to confide in each other.  I really liked Anna's new friend Emmaline and her mother Maya but the character I'm most interested in finding out more about has got to be Abe.  I hope we get to see a lot more of him as the series continues!

A Witch in Winter is a great debut from Ruth Warburton with a wonderful setting, interesting characters and an action packed finale that will have you on the edge of your seat.  This is a trilogy I'm excited to continue and luckily we only have to wait until July for the second installment.  I highly recommend this magical read.