Today is the release day of What Piper Needs, the second book in Amanda Abbott's Pushing the Boundaries series and I have a fantastic excerpt to share with you today. This whole series is hot as hell and if you already read the first book you're going to love this one even more. I also have another fantastic giveaway for you guys for 10 copies of the book! 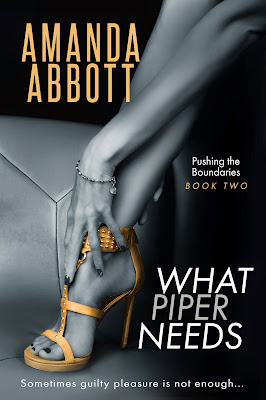 
Honestly, Piper. You never listen to me anyway. If you did, you might find my advice helpful.” “I do listen. It’s just hard to focus when, you know, focusing takes so much effort.” Piper Collins sat in her usual spot, a comfy overstuffed chair by the window, half-listening to her sex therapist, Marianne Cummings, talk about all the changes she needed to make in her life.

Piper suppressed a snicker when she thought of her therapist’s last name, which she did often, sometimes right in the middle of a session. She’d chosen this woman solely based on her name when she’d found it listed in the directory under sex therapists.

I mean, come on. It’d been a no-brainer.

Piper had been seeing her weekly for the last eight years, without fail, and Marianne really was worth the money. But Piper never took her advice.

Piper was a little more attentive today because she was looking forward to sharing Marianne’s sage advice with her bestie, Caroline Stratton, tonight for their weekly STD meeting, which included wine, lots of laugher, some lewd jokes, and plenty of talk about sex.

The acronym stood for Sexual Therapy for Deviants.

It was an utterly nonsensical name for their weekly wine-soaked therapy sessions, but Piper thought it was funny, so she had christened it the very first night, and STD it had stayed.

Caroline, her best friend and neighbor, had gone through her own sexual metamorphoses a few months ago. Mostly in thanks to Michael, Piper’s husband of ten years, spilling the beans about their own extracurricular sex lifestyle. But Caroline wouldn’t be caught dead talking to someone about sex, except for Piper and her own husband, Jason. She was too embarrassed and too proper to open up to a stranger.

So this was Piper’s way of paying it forward.

But, in reality, these new weekly meetings were helping Piper almost as much as they helped Caroline. Caroline had actually made Piper feel more normal than she had in years, so there was something to be said about your girlfriends being the best counselors.

“It’s a wonder your brain isn’t the consistency of scrambled eggs with all that’s going on in there. I see you’re thinking about something hard,” Marianne interrupted her thoughts. “You have no idea what it is you need. That’s why you come here to see me.”

“My brain is not the consistency of scrambled eggs,” she told Marianne, smiling. “I’m just really good at compartmentalizing.”

“I’d say avoiding is a more apt description of what’s going on inside that head of yours.” Marianne took her glasses off her nose and let them rest on her chest, using the rhinestone chain Piper had given her as a gift years ago.

“Fine, avoiding. But, whatever. It’s not going to happen.”

“I think you should rethink that,” Marianne told her. “It’s high time for you to stop being afraid of your own sexual pleasure and jump back in. Start taking risks again. No more watching from a safe distance, feeling left out of the fun. It’s time to be adventurous again, just like in the rest of your life. You’re such a vibrant soul. It’s a pity to constantly miss out on all the sexual adventures that await you.” Ms. Cummings was a product of the sixties. She advocated a lot of free love, which Piper was totally on board with.

But this was different.

Jumping in could produce a ripple effect, one she might not recover from. Or at least, that was her fear. “I’m not afraid. I’m terrified. What if that thing”—Piper waved her hand in the air aimlessly—“happens again? I can’t risk it. I don’t feel ready.”

“That thing? You mean your mental breakdown?” “Um, yes. Exactly that.” Piper still had trouble admitting it had ever happened. It’d been a dark time in her life, and it’d been a blessing that she’d only been out of it for a few weeks, not months, or even years. When she’d been right in the thick of it, she’d felt like the weight of the world was crushing the life out of her. And she felt like she couldn’t breathe for days on end. Her husband Michael had finally coaxed her out of it, giving her a lot of love and understanding, but she wasn’t willing to risk it again, not even for something she needed desperately—to feel sex again. To be scintillated by something.

To have an orgasm shake her to her core.

“Well, that was over seven years ago,” Marianne reminded her, “and from everything you’ve told me, you’re no longer satisfied with your sex life the way it is right now. Things have to change, or it’s going to adversely affect your marriage. You’ve been participating in open sex for the last nine years, and I shouldn’t have to remind you that you’ve assimilated very well to the lifestyle. Even though what brought you here was sex with another man other than your husband. You need to start putting yourself out there again so you can find your real pleasure, and in the process strengthen your marriage.”

“Or things can just stay the same.” Marianne chuckled.

Piper didn’t think it was unprofessional for her therapist to laugh at her. They’d been together for too long to not be completely comfortable with one another. “I know that’s your fear talking. And I’ve been saying the same thing to you for the past year. So you’re either going to listen or you’re not. But now that you have this friend to confide in—what’s her name again?”

“Yes, Caroline. Maybe she can help you see the light better than I can. Piper”—she leaned forward in her straight-backed chair—“there is sexual pleasure in your future if you allow it to happen. Lots of it. You are a bright light on this earth. All you need to do is make up your mind to live again.”

Now it was Piper’s turn to chuckle. “I have news for you. Caroline is not going to be an advocate of me swapping things up. She had her own little run-in not too long ago, and she’s still recovering. She will want me to stay nice and safe.”

“Have you explained everything to her?” “Not exactly.” “Try it. She might surprise you.”

“I think you should fuck the shit out of him.” Caroline drained her third glass of wine and peered over the rim at Piper, her eyebrows up at her hairline. “What? Was that too much?”

“Caroline Elizabeth Stratton!” Piper was legit shocked. And, to date, not a lot of things shocked her. “I cannot believe that just came out of your proper Southern mouth! I’m aghast.” She laughed.

Caroline set her glass down and smiled at Piper across the table like a shrew. They were in Piper’s kitchen for a change, the breakfast nook to be exact.

“I’m no Southern belle,” Caroline replied. “I think we’ve established that many times over. But I’m having trouble wrapping my head around the fact you haven’t had an orgasm in six months! And this is the first I’m hearing about it! What the hell, Piper? I thought we shared everything now. I shouldn’t have to remind you that you’re the one who’s responsible for me being in this lifestyle at all, which has been less than six months. You sat there in my kitchen and painted this fantastical picture of raw carnal pleasure, delights around every corner, and you’re not even living it! What a farce!”

Piper swirled the wine in her cup. The ruby liquid arced close to the rim leaving a thin film behind. This was one of her favorite wines. A Cabernet mix. She saved the good stuff for her nights with Caroline.

They’d been meeting every Thursday for three months like clockwork.

Most of the time at Caroline’s, because she worked from home and it was easy for her to host. But Michael, Piper’s husband of ten years, was out of town and Piper had taken a rare day off from her hectic job at the ad agency and had made them a bunch of their favorite foods, including homemade guacamole, which Caroline was currently munching on.

Piper set her glass down and rested her arms on the table. “I couldn’t tell you before because it’s embarrassing. I used to be the queen of orgasms. I could have ten in a row. Now, zilch, nada, nothing. Telling you I’m failing in the sex department, when you were all hopped up on free love, wasn’t going to happen. I don’t do Debbie Downer. I’m a perpetual Debbie Upper. You should know that by now.”

Caroline leaned over the table, a chip in one hand, and a recently refilled wine glass in the other. “Well, we’re going to fix your sex slump. You just have to leave it to me...”

Now if that extract has caught your attention I have 10 ebook copies of What Piper Needs to giveaway to my readers. You can enter using the Rafflecopter form below, the giveaway ends on the 16th of June and the winners will be announced soon afterwards. Prizes will be sent out directly by Amanda Abbott so by entering you are giving me permission to share your email address with her. 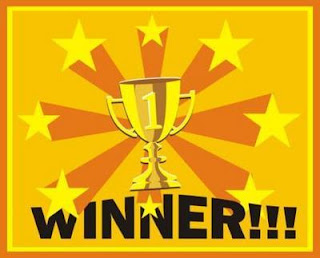 I'm excited to announce the winners of my latest giveaway today with the help of Rafflecopter.

These 6 lucky winners will all be receiving an ebook copy of What Caroline Wants by Amanda Abbott:


Congratulations to you all! I have passed your details on to Amanda Abbott's assistant so you should receive your copies of the book soon!

Thanks so much to Amanda Abbott for sponsoring these giveaway & thanks to everyone who entered. I'm sorry if you didn't win but I'll have more giveaways coming up soon so make sure you check back for another chance to win prizes. In fact, check back in about 10 minutes for the chance to win a copy of book 2 in this series!!
at 22:02 No comments: