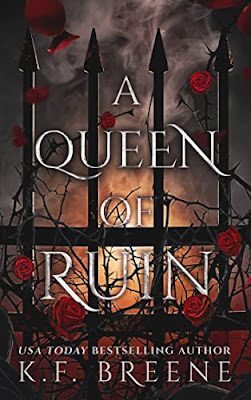 The final book in the Wall Street Journal bestselling series!
I thought once we released the curse, I'd only have one enemy to contend with.
Wrong.
The queen lives. Not only that, but she knowingly hid herself from me and the rest of this kingdom until the moment the curse was broken. Now she is back, and her desires aren't clear. Neither are her motives.
Will she try to take the throne for herself?
We can stop her…unless she had a hand in that curse. In which case, will we need to battle her and the demon king before we can finally live in peace? Or has this all been for naught?
Regardless, we have very little time before the demon king returns to wipe us out.
Deliciously Dark Fairytales Series:
A Ruin of Roses
A Throne of Ruin
A Kingdom of Ruin
A Queen of Ruin
Visit K.F. Breene's website for more information

Review:
A Queen of Ruin is the fourth and final book in K.F. Breene's Beauty and the Beast inspired dark fairytale series so I'm going to assume if you're reading this review you've already read the first two books. I'm going to keep the review deliberately vague to avoid spoilers for this book but events from previous books may be referenced.
I've been totally hooked on this series since book one was published and have eagerly waited for each instalment since then so I was both excited and a bit nervous for this final book. I wanted it to be amazing but at the same time I didn't want it to end. I'm happy to say A Queen of Ruin is everything I hoped for and then some, it's a long book and so much happens but I really don't want to go into much detail because I'd hate to accidentally spoiler anyone.
What I will say is that I was excited to get to spend some time exploring other kingdoms and meeting some of the other rulers, I loved getting to know the new characters from the last book even better and I was thrilled with the way Finley and Nyfain's relationship has developed over the course of the series. This final book was an emotional rollercoaster and there was one moment that shocked me to my core and had me so emotional I had to put it down and walk away for a bit before I could carry on reading but I still loved every minute of it.
I'm sad the series has come to an end but I love the way everything has wrapped up and I think we got a really fitting end to the series. That said I have really high hopes for a spin off or two, not because things have been left unfinished but because some of the side characters are so fantastic I want to spend more time with them. I can't say who because *spoiler* BUT one in particular is part of a HUGE revelation that I'm desperate to know more about. I'm sure anyone who has read the book will know exactly what I'm talking about.
K.F. Breene has long been an auto-buy author for me and this series has only cemented her place on my favourite authors list. 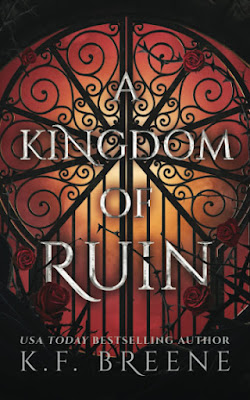 Never sell your soul to the Demon King.
Too late.
In an effort to save all that I love, I have to finish the job Nyfain started… and ruin myself.
I've made a trade with the most cunning creature alive.
Me for them.
The dungeons will be my new home. Dolion's destruction will be my new goal.
I just have to get out of here and back to my golden dragon. Preferably alive.
Deliciously Dark Fairytales Series:
A Ruin of Roses
A Throne of Ruin
A Kingdom of Ruin
A Queen of Ruin
Visit K.F. Breene's website for more information

Review:
A Kingdom of Ruin is the third book in K.F. Breene's Beauty and the Beast inspired dark fairytale series so I'm going to assume if you're reading this review you've already read the first two books. I'm going to keep the review deliberately vague to avoid spoilers for this book but events from previous books may be referenced.
I have loved this series from the first book but it just keeps getting better and better with every instalment. After the cliffhanger ending of book 2 I knew Finley was going to be in for a bumpy ride in this book but there was so much I didn't expect from this story, especially the fun new allies she met along the way. Trapped in the demon realm thanks to the bargain she made to protect Nyfain Finley is now Dolion's prisoner and has a newfound home in his dungeon. Her bond to Nyfain protects her from some things but it doesn't stop physical torture from her guards so her life is now mostly pain and anguish as she tries to figure out a way to escape.
I really admire Finely's attitude and the way she is so determined to fight for and protect the people she cares about no matter what it costs her personally. She has earned a lot of respect from friends she made in Nyfain's court and her selfless attitude is starting to rub off on some of them which leads to some interesting developments. I love that we got some of the story from Hadriel's point of view here, his character is just so funny and gave some much needed light relief in places.
I don't want to say much about the new characters that we are introduced to but there are some I absolutely loved and can't wait to see more of in the future. There were some great revelations in this book and things are only going to get more interesting in the next book thanks to the way things ended. Luckily this didn't finish on such a cliffhanger as A Throne of Ruin but it's still left me wanting the next book ASAP.