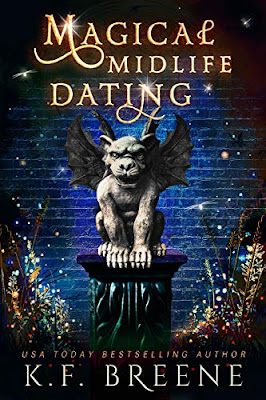 The second book in the Leveling Up series by USA Today and Wallstreet Journal Bestselling author K.F. Breene.
She must learn to fly, but can she withstand the allure of the handsome new teacher?
Book two in the Top 10 Kindle Store and internationally bestselling series by USA Today Bestselling Author, K.F. Breene!
The decision has been made. Jessie has taken the magic, and all the weird that goes with it. Including wings.
There's only one problem - she can't figure out how to access them.
Through a series of terrible decisions, Jessie realizes she must ask for help. Gargoyle help.
But she could've never predicted who answers her call - he's an excellent flier, incredibly patient, and a good trainer. He's also incredibly handsome. And interested.
Maybe flying isn't the only thing she needs help with. Maybe she needs help getting back on that saddle, too, emerging into the dating pool.
Except, the new gargoyle is also an alpha, just like Austin, and the town isn't big enough for two.
Turns out, flying is the least of her problems.
Leveling Up Series:
Magical Midlife Madness
Magical Midlife Dating
Magical Midlife Invasion
Magical Midlife Love
Magical Midlife Meeting
Magical Midlife Challenge
Visit K.F. Breene's website for more information

Review:
Magical Midlife Dating is the second book in K.F. Breene's Levelling Up series (if you haven't already read Magical Midlife Madness I'd highly recommend reading that book first) and it was another fun instalment.
I really love main character Jessie, at 40 she's older than a lot heroines and because of that she's confident in her own skin and knows what she wants from life. She spent her whole life not knowing that supernatural creatures were real so she's been really thrown in at the deep end by her move to a small town full of shapeshifters, vampires, gargoyles and more. Since taking over running Ivy House and inheriting her own magical powers Jessie has had a steep learning curve and knowing that she has dangerous enemies closing in means she needs to level up her abilities fast if she wants to be able to protect herself and the people she's coming to care about.
This series has been so much fun to read so far. The characters living in and around Ivy House are totally bonkers in the best kind of ways and I really enjoy the group banter and watching Jessie figure out how to reign in everyone's crazy impulses. I also really love the friendship between her and the town alpha, polar bear shifter Austin, I have high hopes for those two if Austin is ever willing to admit his feelings. This story sees an influx of gargoyles who arrive ready and willing to help Jessie learn to harness her magic, some I like more than others but it was definitely fun seeing them try to sort out their places in the hierarchy.
These books are really fun and easy reads and I can't wait to continue the series.