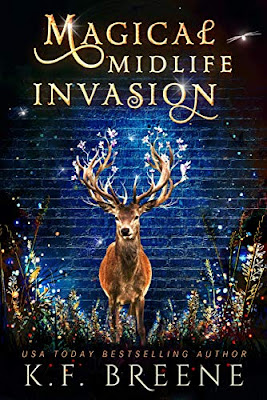 Jessie is well on her way to learning her new life and settling in. The tough alpha, Austin, has joined her team, and she has painstakingly learned to fly. At the moment, life couldn’t get any better.
But it can get a whole lot…more irritating.
Her parents have decided to visit. They don’t know anything about magic, about Jessie’s new digs, or about the crazy crew living in and around Jessie’s house. She must do everything in her power to keep the truth away from them.
Which would be much easier without the unfelt presence lurking within Ivy House’s borders. It seems an enemy has figured out a way to magically bypass Ivy House’s defenses. Jessie is completely exposed.
The real battle, however, won’t be with the incoming force. It will be between Mr. Tom and Jessie’s mom, each intent on being the most helpful. Mr. Tom might have met his match, and he is not pleased.
Just when things were finally settling down, Jessie is in the thick of it again, and this time, the turmoil is all around her.
Leveling Up Series:
Magical Midlife Madness
Magical Midlife Dating
Magical Midlife Invasion
Magical Midlife Love
Magical Midlife Meeting
Visit K.F. Breene's website for more information

Review:
Magical Midlife Invasion is the third book in K.F. Breene's fun urban fantasy series starring gargoyle Jessie, the magical house she inherited and all the weird and wonderful supernatural characters that came with it. Jessie is still very new to the magical world, she didn't even know magic was real until fairly recently and she had no idea or her own abilities either but she is working hard to get to grips with everything and is slowly getting control over her power. Now that the wider magical world is aware of her existence though she has a big target painted on her back and she's going to have to level up fast if she wants to survive.
As if dealing with her new situation wasn't enough Jessie now has a surprise visit from her parents to contend with. They are also completely ignorant of the magical community and Jessie wants to keep them that way so it's hard to explain a house that keeps changing and her rather strange butler Mr Tom. I really enjoyed seeing the way Jessie handled everything in this instalment, I also really love that Ivy House is becoming a character in it's own right with separate needs and wants to Jessie. I find magical houses fascinating and thought it was hilarious that Ivy House kept playing tricks on Jessie's father.
The only slightly frustrating thing is the ongoing will they / won't they between Jessie and Austin. It's so obvious that they're perfect for each other, it's also obvious that they both have the hots for each other but they're both gun-shy and scared to make the first move. I can understand why they feel like that but you know those books where you're mentally grabbing both of the characters by the back of the necks and pushing their heads together yelling "now kiss you fools"? Well that was definitely me as I read this book! I do have high hopes for them getting their act together soon though so fingers crossed for the next instalment.