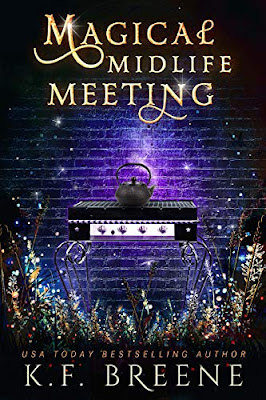 It's time for a magical battle Jessie isn't sure she's prepared for.
Elliot Graves has been a thorn in Jessie's side since before she agreed to take the house magic. He has constantly brought the fight to her doorstep.
Not this time.
With the help of Austin's shifters, the Ivy house crew will meet Elliot Graves in one of the most dangerous places imaginable - his home turf. But not before another creature joins the circle.
Leveling Up Series:
Magical Midlife Madness
Magical Midlife Dating
Magical Midlife Invasion
Magical Midlife Love
Magical Midlife Meeting
Visit K.F. Breene's website for more information

Review:
This series really has been getting better and better with every book and Magical Midlife Meeting is the culmination we've been waiting for in so many ways. Elliot Graves has been a thorn in Jessie's side from very early on and now she is finally getting the chance to face off against her nemesis. Things aren't quite what they seem though so Jessie is going to have to think fast before she does something she might later come to regret.
I really enjoyed this book, as much as it's been fun meeting various family members of both Jessie and Austin in the last couple of books this story things are pulled right back to the core members of Jessie's team and the protectors of Ivy House. It's time to meet Elliot Graves face to face and it's being done on his territory so the whole crew is on edge just waiting to see how things play out. They come face to face with multiple mages and soon find themselves in a fight for their lives.
I really don't want to say too much about this book because I don't want to accidentally spoiler anyone but there is a lot of action and some really interesting revelations for you to look forward to when you pick up this book. By the end Jessie is forced to rethink a lot of her old assumptions and question who the real enemies are and we've definitely been set up for an even more dangerous next book in the series. I'm definitely looking forward to seeing what happens next.