Today I'm taking part in the blog tour to celebrate the release of Empire of Silence, the first book in Christopher Ruocchio's fabulous new series that's epic science fiction series. This is a huge book both in scope and number of pages (I'm currently about three quarters of the way through so watch out for my review coming asap!) and it's one that will definitely appeal to epic fantasy and space opera fans. It's been described as "Dune meets The Name of the Wind" so that should give you a hint of what you can expect from the story!

I have a brilliant guest post from Christopher Ruocchio to share with you today with his top five space operas (we can never have too many books on our to read mountains right? I know I just added a few more to mine LOL!) but first let me tell you all about Empire of Silence: 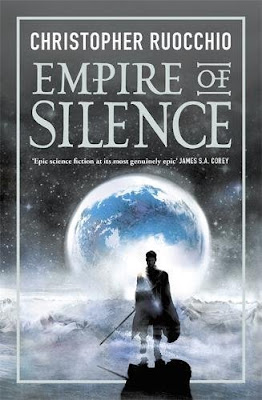 Hadrian Marlowe, a man revered as a hero and despised as a murderer, chronicles his tale in the galaxy-spanning debut of the Sun Eater series, merging the best of space opera and epic fantasy.

It was not his war.

On the wrong planet, at the right time, for the best reasons, Hadrian Marlowe started down a path that could only end in fire. The galaxy remembers him as a hero: the man who burned every last alien Cielcin from the sky. They remember him as a monster: the devil who destroyed a sun, casually annihilating four billion human lives--even the Emperor himself--against Imperial orders.

Fleeing his father and a future as a torturer, Hadrian finds himself stranded on a strange, backwater world. Forced to fight as a gladiator and navigate the intrigues of a foreign planetary court, he will find himself fighting a war he did not start, for an Empire he does not love, against an enemy he will never understand.

Doesn't it sound fab? I'm really enjoying the story so far and can't wait to see how it ends!

Now please give a warm welcome to Christopher Ruocchio and prepare to covet even more books.

The space opera combines the very best of epic fantasy with the very coolest parts of science fiction. The dramatic heights, flashy action set pieces, and high romance set against a dark background of stars and burning worlds...it’s the biggest canvas imaginable, a place where the promise of the future meets the mythic past, a genre where anything is possible. Star Wars opened the door for me, and the original films hold a special place in my heart, as they do for so many fans. But none of you are here to hear about Star Wars, so here goes: 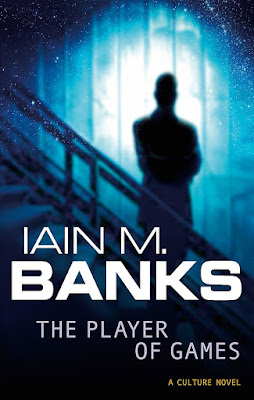 By rights, I shouldn’t like the Culture books. The late Mr. Banks and I seem to disagree about everything: he has a very positive view of artificial intelligence, I’m a deep skeptic; he believed space travel will weaken state authority, I think the prospect of it will make them clamp down harder. A committed anarchist, Mr. Banks writes about a hyper-advanced machine-governed pseudo-anarchist utopia where people are free to do whatever they like. It sounds lovely (though I don’t relish the thought of being an amusing pet to a bunch of god-like benevolent AI). But I love these books, in no small part because Mr. Banks tends to write about the problems with his utopian vision (a rare trait amongst utopian thinkers), or about people who don’t belong. Use of Weapons is my particular favorite—though it makes for a bad introduction to the series, for that, I’d recommend The Player of Games—and its hero, Cheradenine Zakalwe, remains one of my favorite characters in SF/F: an immortal soldier who would rather be a poet. The series is an utter delight, with a unique sense of humor and worldbuilding (and worlds) on a truly epic scale. But make no mistake, for all its levity, Banks is never afraid to take his readers down dark alleys and into places more terrible (and against enemies more fierce) than his sometime-laughing tone might suggest. 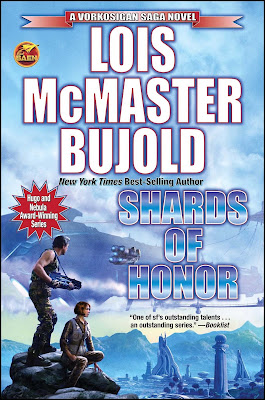 When I’m not writing, I have the honor to be the Assistant Editor for Baen Books in the US (how I came to be published by DAW and by Gollancz is a long story). Toni Weisskopf insisted I read The Warrior’s Apprentice, and I did. And every other book in the series in the course of a few months. Miles Vorkosigan is perhaps my favorite single character in science fiction. The disabled son of the Prime Minister of the planet Barrayar, a sort of Czarist regime on a planet newly connected to the galaxy’s wormhole nexus, Miles is by turns brilliant, self-effacing, and a little bit insane—but above all it’s his compassion and charisma (and his seat-of-the-pants command style) that inspire the love of his friends and readers alike. Bujold deserves every one of the Hugos she received for this series—including the first ever Best Series Award, richly deserved. High marks for me include the absolutely gut-wrenching novella “The Mountains of Mourning,” in which Miles must confront an infanticide on his homeworld, where disabled infants are often killed to keep the native population free of mutation; the sprawling revenge epic Mirror Dance; and its immediate sequel, Memory, a more quiet meditation on aging that deals with the fallout of the horrific events in Mirror Dance. It’s very rare to find a series that follows a character from childhood to adulthood to parenthood and on that handles it with such grace and honesty. Moreover, Lois’s prose is remarkable. Understated and spare, she does more with a sentence than most writers (myself very much included) can do in a paragraph. If you haven’t read it, start with The Warrior’s Apprentice or Shards of Honor, and start today. 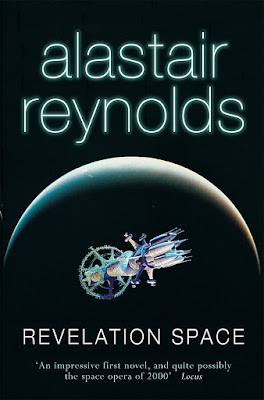 Featuring some of the best worldbuilding in the genre, Alastair Reynolds’ Revelation Space series pushes the low-life, high-tech feel of the great cyberpunk writers into the galactic future. His cities and orbital habitats bring out the very best in human ingenuity—and the worst of human nature. These are dark places, dangerous places, places where our capacity for reason and creativity long since came unglued from any sense of morality, and the effect is chilling. I have never seen more creative and terrifying uses of technology in a series. How he can take an industry staple—like an inertial dampener—and make it utterly terrifying is beyond me. I remember I accidentally read his short story, “Nightingale,” when I was about 12 years old. Those of you familiar with that story about an artificially intelligent hospital ship gone rogue will understand if I didn’t sleep for days. I resisted reading the novels themselves for many years because of this little incident. Alastair Reynolds’ universe is one I would hate to live in, but remains one of my very favorite to explore. 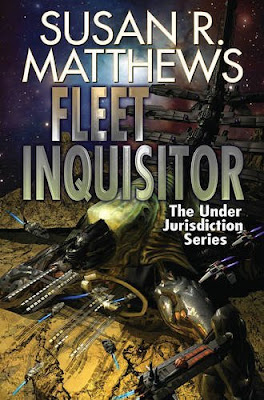 4. UNDER JURISDICTION BY SUSAN R. MATTHEWS

A more recent discovery of mine. I had the privilege of working with Susan while we were in the process of reprinting her Under Jurisdiction series, and so reread her old books in preparation for the release of new ones. Like the Miles books, these focus on the career of a single officer—Andrej Kosciusko—from the start of his career and through his life. Unlike the Miles books, Andrej is a torturer. An avid hobby-historian like myself, Susan shares my interest in the Qing Dynasty’s horrific legalism, and a version of it plays out in grand scale here, with Andrej transformed from a provincial doctor into an inquisitor for a horrific totalitarian regime. Susan pulls no punches. It’s hard to like Andrej, who keeps slaves and learns to really (and I mean really) enjoy his work, but it is an absolutely brutal examination of the way in which a seemingly ordinary person can be transformed into (and redeemed from) a part of the apparatus of the state...mirroring the way ordinary policemen were transformed into executioners in Nazi-occupied Poland, or into Party workers in Maoist China or the Soviet Union. This is a series very much not for the faint of heart, but for those of you who like to stare into the abyss, there are few darker. The series begins with An Exchange of Hostages, but the first three have been packaged together in an omnibus called Fleet Inquisitor, as well. 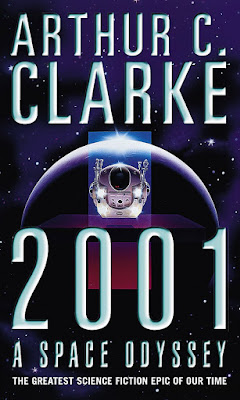 I’ll admit to one heresy: I don’t care for Stanley Kubrick’s film 2001: A Space Odyssey. I respect its enormous achievement, and it’s absolutely a work of art. But you see, I was—and remain—incurably restless. Sitting through that much screen-time with nothing but the dance of spaceships to classical music is entirely beyond me, and was beyond me even before I had a cell phone. But the books were a different story. A canonical text in our genre, the Space Odyssey books taught me that science fiction could emphasize the science part and not be tedious. They were also my first brush with a threatening artificial intelligence in HAL, who remains one of the genre’s best and most legendary villains (I remain extremely suspicious of robots, and suffer Alexa’s presence for my girlfriend’s sake). It was also my first encounter with the idea of transcendent alien life forms, a genre trope that I remain enamored of. The fact remains: I was reading these books in about third grade, right when I was starting to write, and so it is most in Clarke’s shadow—not Asimov’s or Heinlein’s—that I think I may be found.

Thanks for so many fabulous recommendations Christopher! I read 2001: A Space Odyssey many years ago and I really enjoyed Revenger by Alastair Reynolds so I already had the Revelation series on my radar but the other series you mentioned are all ones I definitely need to check out. I'm also really enjoying Empire of Silence so I'm looking forward to continuing the Sun Eater series too!

Don't forget to check out the other fab stops on the Empire of Silence blog tour: 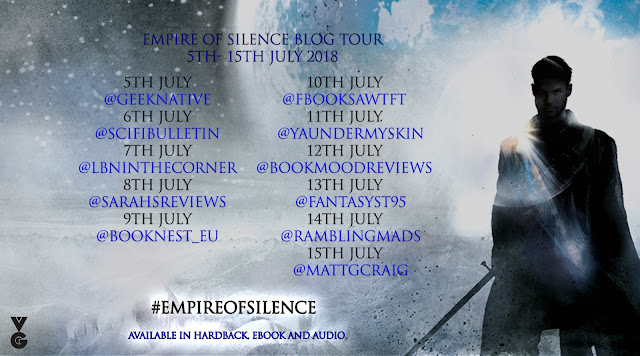 You can follow Christopher Ruocchio on Twitter @TheRuocchio and check out the #EmpireOfSilence tag for more information!
at 09:00