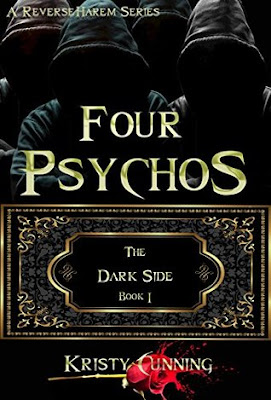 I'm not so different from most people.
Like everyone else, I have life goals.

Goal #1: Become a real girl instead of this invisible ghost thing I currently am.

Goal #2: Convince the four men I've been haunting for the past five years to pick me to be their new toy after goal one is complete.

Goal #3: Figure out who/what I am and why I can't remember anything past the five years I've been haunting this quad.

See? Perfectly normal. Sort of.
Gotta start small, after all.
It's not like anyone else is perfect either.

Review:
Four Psychos is the start of a fun reverse harem series with a very unusual premise. The main character Keyla is a ghost who has no memory of life before she died, her whole existence boils down to the last 5 years which she has spent living with a group of four supernatural men. She may have been stalking these guys but until now she's had no way to communicate with them, they can't see or hear her and she can't have any kind of effect on her surroundings. It's been a lonely time for her but the men have become like family, she knows everything about her even though they have no idea she exists. Keyla's powers have slowly been growing though and during an attack on her men she suddenly makes a break through so for the first time she can remember people can actually see and talk to her.

Keyla is over the moon by this development but Kai, Jude, Ezekiel and Gage are much more sceptical about things, not surprising really when a strange woman appears and seems to know everything about their lives! The guys don't trust her and have no way of knowing whether she is telling the truth or not but it's very obvious from her abilities that she is something they've never come across before and they're determined to get to the bottom of the mystery.

This was a great introduction to the series and it definitely left me wanting more. I really enjoyed the banter between Keyla and the others and I really liked the fact that they were so sceptical about her sudden appearance and the strange things she was telling them. I also appreciated that although they found her attractive this didn't dive immediately into a full on harem relationship (it's actually pretty tame, there's no sex just a couple of steamy scenes but I'm sure we'll get much more in the sequel!). Their relationship feels more realistic because it's a slow build and I'm enjoying seeing them all get to know each other properly now they can communicate. I have to admit I got a little annoyed with how badly some of the guys treated Keyla but she was more than capable of standing up to them and calling them out on their bad behaviour so it did have that going for it.

I'm looking forward to finding out more about what is going on, who Keyla really is and why she seems to be linked to the guys, who is targeting the guys and why, and of course watching their relationship continue to develop.