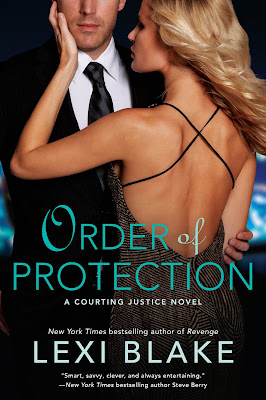 To high-end defense attorney Henry Garrison, Win Hughes is a woman he met during one of the most trying times of his life. She’s soft and warm, and he finds solace in their brief relationship. But Win has a secret. She’s actually Taylor Winston-Hughes—born to one of the wealthiest families in the country, orphaned as a child by a tragic accident. Win moves in the wealthiest circles, but her lavish lifestyle hides her pain.

When her best friend is murdered in the midst of a glittering New York gala, Win’s charged with the crime, and the only person in the world she wants to see is Henry.

Henry is shocked at the true identity of his lover, but he can’t reject the case. This case could take his new firm into the stratosphere. Still, he’s not getting burned by Win again. And yet every turn brings them closer together.

As the case takes a wild turn and Win's entire life is upended, she must look to the people she's closest to in order to find a killer. And Henry must decide between making his case and saving the woman he loves…

Review:
Henry Garrison, also known as the Monster of Manhattan, is an extremely successful defence lawyer who saw his career go up in flames when he spiralled into alcoholism during the spectacular break up of his marriage to an actress. Now he's finally starting to put his life back on track, he's sober and he's started up a new law firm with friends hoping to slowly rebuild his reputation. He meets Win Hughes when he's on a last vacation before building his business starts to take over his life again, they have a hot fling but agree not to continue it when they get back to their lives no matter how much they might want otherwise.

What he didn't know is that Win is actually Taylor Winston-Hughes, daughter of an incredibly wealthy family and part of the rich and famous set he promised never to join again after his breakup. When Win is accused of murdering her best friend Henry is the only person she trusts to prove her innocence but, as much as his firm could use the publicity of such a high profile case, he's worried about getting involved with someone who is constantly harassed by reporters and being dragged back into the limelight.

I really enjoyed the first half of this story, I thought Henry and Win's first meeting was cute and I enjoyed seeing them connect with each other. They both have a lot of baggage, Henry is an alcoholic and Win is also in recovery from an eating disorder, but I liked the way they opened up to each other and they were able to understand each other better because of their own issues. They made a really sweet couple and even though I knew Henry wouldn't be happy when he discovered Win's identity I was still rooting for them as a couple. Then when they returned to their daily lives things went a bit sideways.

Win was the same sweet girl she'd always been, someone who had worked hard to rid her life of the toxic people who helped drive her into an eating disorder and just trying to stay out of the spotlight. Henry on the other hand found his inner shark again and that wasn't an improvement on his personality. When he uncovered the truth about Win's identity he was vicious about it. Yes she'd hidden things from him and I get why that upset him but I think he took it too far and if I was Win I'd have given up on him long before he came around. Unfortunately that made it much harder to root for them as a couple and I started to wonder if they'd be better off apart. Henry did sort himself out eventually but I would have liked it to have happened a little sooner than it did.

I also felt the murder mystery ended up being a bit too far fetched, certain parts made sense but others were just ridiculous and I can't understand how nobody ever suspected anything sooner. One thing I will say is that I liked Henry's business partners, David and Noah, far more than I liked Henry so I have very high hopes for their stories. I also like the way Lexi Blake manages to connect all of her different series together, I've not read her Masters and Mercenaries or Lawless series yet (I'm new to Lexi Blake's writing and have been slowly working my way through her backlist!) but I always enjoy cameo appearances and they definitely make me more excited to get to those stories.