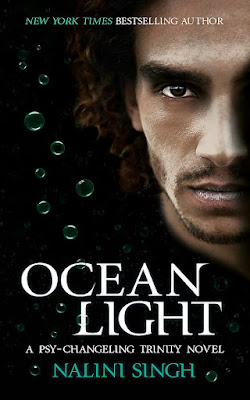 New York Times bestselling author Nalini Singh dives beneath the surface of her Psy-Changeling world into a story of passionate devotion and selfless love . . .

Security specialist Bowen Knight has come back from the dead. But there's a ticking time bomb in his head: a chip implanted to block telepathic interference that could fail at any moment - taking his brain along with it. With no time to waste, he should be back on land helping the Human Alliance. Instead, he's at the bottom of the ocean, consumed with an enigmatic changeling . . .

Kaia Luna may have traded in science for being a chef, but she won't hide the facts of Bo's condition from him or herself. She's suffered too much loss in her life to fall prey to the dangerous charm of a human who is a dead man walking. And she carries a devastating secret that Bo could never imagine . . .

But when Kaia is taken by those who mean her deadly harm, all bets are off. Bo will do anything to get her back - even if it means striking a devil's bargain and giving up his mind to the enemy.

Review:
Nalini Singh is one of the few authors who has never let me down, I preorder her books the second they pop up on amazon, devour them the minute I can get hold of them and I always know that I'm in for heartwarming romance, fantastic characters and wonderful world building. Her Psy-Changeling series is one of the best paranormal romance series out there and this new second phase of the series is proving that she's still at the top of her game. As much as I love the SnowDancer and DarkRiver packs I'm really enjoying the expansion of this world first with the bears in Silver Silence and now getting to know the water changelings of BlackSea in Ocean Light.

Bowen has always been a character I've been curious about, as the human leader of the Alliance he has a lot of power in his hands but the ticking time bomb of the telepathic blocker implanted in his brain has him desperately looking for answers. Then there was the shocking attack in the last book which of course left me even more keen to get answers. He's such a sweet hero, I loved how open and honest he was with Kaia from the very beginning and how determined he was to make the most of the time he had left if they weren't able to fix his implant safely. I've always admired the way he wanted to put humans on the same playing field as the Changelings and Psy too, even though humans are physically weaker than the Changelings and defenceless against most Psy telepathic abilities they vastly outnumber those two groups and Bowen is fighting for equality amongst the races.

Kaia is a character we've not met before but she was brilliant too, very intelligent but the best thing about her was her huge heart and the way she cared for everyone in her circle. Kaia is the kind of person that is always there to offer a shoulder to cry on or moral support but who never wants to burden anyone with her own problems so she always sees to her own needs last. Bowen saw that immediately and went to great effort to show her how important she was to him. They fitted together really well and balanced each other out in a lot of ways.

There is no denying that the first half of Ocean Light is a little slower paced and more character driven than most books in this series, the action doesn't really pick up until later on but I was having so much fun exploring BlackSea's underwater home and meeting so many different water changelings (whales, turtles, sharks and so many more - including ones with tentacles!) that I really enjoyed the change of pace. Later on as the danger increases and things get more complicated I was so fully invested in the characters that I was on the edge of my seat waiting to see how the story would end. This was another fantastic instalment in the series and I can't wait to find out who will be the stars of the next one!