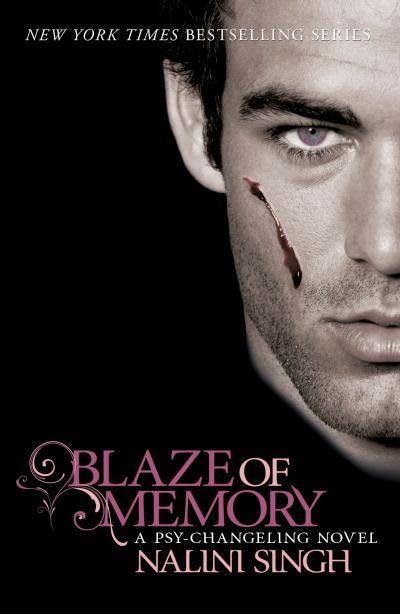 Dev Santos discovered Katya unconscious and battered, with no memory of who she is. All Katya can tell him is that she's dangerous. Charged with protecting his people's most vulnerable secrets, Dev is duty-bound to eliminate any and all threats against them. It's a task he's never hesitated to complete . . . until now, when he finds himself drawn to a woman who could prove to be the enemy's most insidious weapon yet.

Stripped of her memories by a shadowy oppressor and programmed to carry out cold-blooded murder Katya Haas is fighting desperately for her very sanity. Dev is her only hope. But how can she expect to gain the trust of a man who could very well be her next target? For, in this game, someone is going to die . . .

Review:
This series just gets better and better with every single book and I'm at the point now where I'd find it impossible to pick a favourite couple! I don't know how Nalini Singh does it but she consistently writes books that suck me in from the first page and that I can't put down for anything. Blaze of Memory is a little different to the earlier books because we have two Psy main characters. To be honest I wasn't sure if I'd enjoy it as much because of that since the Psy characters can often take longer to warm up to than the Changelings & humans but as usual Nalini proved me wrong and had me hooked very early on.

This story gives us a lot more information on the history of the Psy and how Silence came into existence. Dev is the leader of the Forgotten Psy, decendents of the Psy who refused to accept Silence as an option and who left the Psynet determined to find another way. The Psy have hunted the Forgotten ever since and it is Dev's job to keep his people safe. He is ruthless when it comes to their protection and prepared to do whatever it takes but the more he blurs the lines the harder and colder he becomes.

When Katya is left on his doorstep beaten and bruised with no memory of how she got there or even where she came from Dev is immediately suspicious. He suspects that she has been sent as a spy for the Psy council and he is sure that she can't be trusted but no matter how often he reminds himself of that fact he can't seem to resist her. Katya has been through hell and only just survived to tell the tale, as her memories start to return she only becomes even more convinced that she is a danger not just to Dev but also to all of the Forgotten and she hates the thought that someone could be controlling her without her realising it. Katya is an incredibly strong woman, she had to be to survive her ordeal and we really get to see that strength as her memories come back and she starts to realise exactly what was done to her. She isn't the kind of woman who will give up and she becomes determined to turn on the person who programmed her - even if it costs her her life.

I don't want to say too much more about the plot but I found this was an incredibly fast paced story and I completely fell in love with both Dev and Katya. They go through so much and there were times when my heart broke for them - at one point I was having trouble reading because of the tears that were rolling down my face! This book is darker than some of the earlier stories and I definitely found it more emotional, everything feels so desperate and it really does feel like there is no chance of a happy ending. I'm not going to tell you how things end so I'll just say that there are some really interesting developments to the world as a whole and with some of the characters we've already met in the previous books. This series is definitely a favourite and I'll buy ANYTHING that Nalini Singh ever writes!