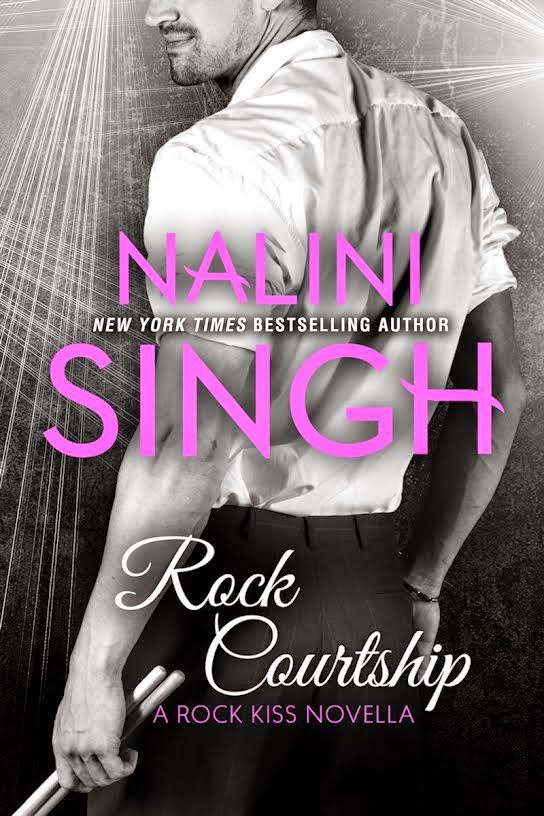 What happens when the Gentleman of Rock decides to play dirty?

A drummer for the hottest rock band on the planet, David has a single, powerful weakness: Thea, the band’s publicist and the woman who steals his breath away with her every move.

Only problem is, Thea doesn’t date clients—or musicians. Emotionally scarred by a cheating ex, she’s not about to risk her heart with a man who has groupies buzzing around him like flies. Even if his sexy smile ties her up in knots.

What she doesn’t know is that David is a one-woman man...and he’s madly in love with her. David’s determined to prove he’s worth the risk, and willing to court her, step by exquisite step. Thea’s about to discover just how long and hard this handsome drummer can play.

Review:
Rock Courtship is the second story in Nalini Singh's Rock Kiss series and features Schoolboy Choir's drummer David and their publicist Thea. If you've read Rock Addiction then you'll be familiar with both of these characters and you'll have already seen how head over heels David is for Thea. I had high hopes for this story because I was already a big fan of David and I'm happy to say he didn't disappoint me.

David is such a sweet guy, he hasn't let the band's success go to his head and is a genuinely nice person to spend time with. He's earned the reputation as the Gentleman of Rock in the press and he lives up to it in every way. David has been crazy about Thea ever since he first met her but the time was never right for him to make a move, first she was in a relationship, then she was recovering from a broken heart and now she is very clear about her rule of never mixing business with pleasure and since she's the band's publicist she wouldn't dream of dating David. But David has waited long enough, he knows she is the one for him and no other woman will do, all he has to do is convince Thea to give him a shot.

Taking the advice of Thea's sister Molly David sends Thea a memo explicitly outlining his case for them starting a relationship. Thea feels obliged to respond in kind and soon they are sending each other the most wonderful flirty emails as David slowly starts to win Thea around. These two really are perfect for each other and I loved seeing them grow closer as Thea starts to let down her barriers. She has good reasons for finding it hard to trust but David has been a friend for a long time and deep down she knows he would never betray her like her ex did. The two of them have fabulous chemistry (I think David may possibly be even hotter than Fox!) but more than that they also have respect for each other and a solid, caring foundation to their relationship.

I think my only complaint about Rock Courtship was that I wanted it to be longer, I could have happily devoured a full length novel about these two rather than a novella! That isn't to say the story isn't satisfying, I just loved them so much that I wanted to spend more time with them. David writes the most wonderful emails - who knew that memos could be sexy? - and I wanted to see more of them. This is definitely turning into one of my favourite NA series, super hot rock stars, strong independent heroines and fantastic hot sex - what's not to love?