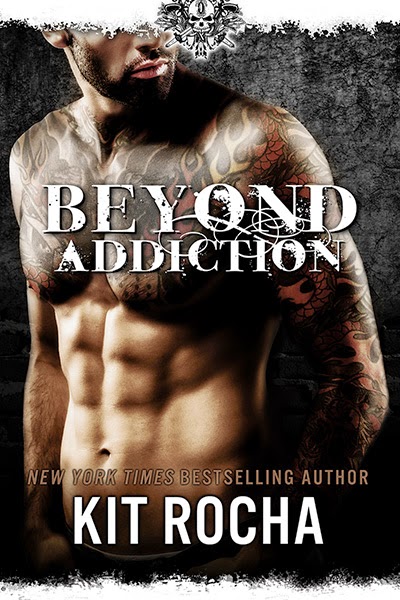 She’s fought like hell to leave the past behind.

Trix changed her name and her life when she got clean four years ago. Now, she has a new family and a job she loves—tending bar and dancing at the Broken Circle. As an O’Kane, she’s happy, untouchable. Until a nightmare from her old life tears her away from her home and drags her back to Hell—also known as Sector Five.

Losing Trix was the kick in the head Finn needed to get sober, but working as an enforcer for a man he hates is slowly crushing his soul. The only thing that keeps him going is his determination to destroy Sector Five from the inside. Then Trix comes back into his life—alive, in danger—and nothing else matters.

Getting her home could be a suicide mission. The only thing deadlier is the old spark that flares to life between them. Soon, Finn and Trix are battling the one addiction neither of them ever managed to kick—each other. And it could cost them everything.

Review:
This series really does get better and better with every instalment and I am completely and hopelessly addicted to the O'Kanes! I have been dying to get my hands on Beyond Addiction ever since we saw Trix being captured by thugs from Sector Five at the end of Beyond Jealousy, I thought the wait might drive me insane but it was so, so worth it.

Trix escaped Sector Five four years ago and since leaving behind a life of abuse and drug addiction she has made a home for herself with the O'Kanes in Sector Four. She changed her name and let the people she knew in Sector Five think she was dead so that they wouldn't come looking for her. Finn is an enforcer for the Sector Five leader but he loved Trix more than anything and losing her broke his heart. He managed to get clean but is biding his time until he can escape from the sector after destroying his boss and everything he stands for. Finn had no idea that Trix was still alive but the second he finds out she has been captured he knows he has to help her escape, it doesn't matter if it kills him he will make sure he gets her safely back to the O'Kanes.

Trix and Finn's story is action packed from the get go. The shit hits the fan the second that Finn sees how much trouble Trix is in and the drastic action he has to take to get her free is only the beginning - he still has to get her safely back to O'Kane territory. Sector Five bring out the big guns searching for them and Finn's actions give them the perfect excuse to go to war with Sector Four. Dallas isn't one to back down from a battle though and when one of his people is in danger his whole crew will fight to protect them. The story is incredibly fast paced and I spent the majority of the story with my heart in my mouth praying that Trix and Finn would make it to safety.

I loved seeing Trix and Finn's relationship rekindle, they had obviously had a strong connection before but they were both in a drug fuelled haze most of the time so things are very different between them now that they are clean. I was pleased that they both took the time to get to know each other again, they had both changed a lot since they'd last seen each other and even though they still had a deep bond they had to learn each other all over again. I loved seeing Trix stand by her man when they got back to Sector Four. Understandably the O'Kane crew were wary of Finn, he used to be an enforcer for their enemy so they aren't going to just let him walk in like he belongs there but they were grateful for his help getting Trix out and were willing to give him a chance for her sake. Finn has to earn their respect and trust though and I appreciated that he was willing to do that for her.

This story was just as addictive as the previous instalments and this has fast become a favourite series. I always immediately drop everything the second I get my hands on one of these books (I did actually read this back in August & had a great excuse to reread it recently because I'd left it so long to sit down and write my review). I will always auto-buy anything that Kit Rocha writes, these stories are dark, sexy and absolutely fantastic and I don't think I'll ever get enough of them!