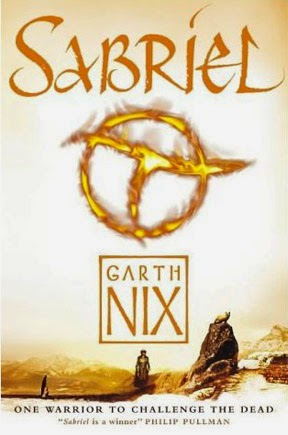 Who will guard the living when the dead arise?

Sabriel is sent as a child across the Wall to the safety of a school in Ancelstierre. Away from magic; away from the Dead. After receiving a cryptic message from her father, 18-year-old Sabriel leaves her ordinary school and returns across the Wall into the Old Kingdom. Fraught with peril and deadly trickery, her journey takes her to a world filled with parasitical spirits, Mordicants, and Shadow Hands – for her father is none other than The Abhorson. His task is to lay the disturbed dead back to rest. This obliges him – and now Sabriel, who has taken on her father's title and duties – to slip over the border into the icy river of Death, sometimes battling the evil forces that lurk there, waiting for an opportunity to escape into the realm of the living. Desperate to find her father, and grimly determined to help save the Old Kingdom from destruction by the horrible forces of the evil undead, Sabriel endures almost impossible challenges whilst discovering her own supernatural abilities – and her destiny.

Review:
I'm showing my age a bit here but I first read Garth Nix's Old Kingdom series years ago when it was first released and it's one I've revisited multiple times over the years. It's an outstanding fantasy series, one that is truly unique and that just gets better and better with each visit. I find it incredibly easy to fall into this world and once you're there you'll never want to leave.

The main character is a young girl called Sabriel, she was born in the Old Kingdom, a land full of magic and strange creatures, but her father, the Abhorsen, sent her across the Wall to live in Ancelstierre to attend boarding school. Anclestierre is a land without magic and Abhorsen felt that Sabriel would be safer there. Sabriel may live away from her father but he visits her regularly and has taught her about charter magic and some of the ways of the necromancers. When her father goes missing Sabriel knows she is the only one who can help him so she sets out to travel into the Old Kingdom to find and rescue him. In an unfamiliar world Sabriel must use her wits to survive and she can only hope that the allies she has made are really on her side.

Garth Nix has created a rich world that he brings vividly to live with his beautiful, descriptive writing. The realm of the dead is haunting and incredibly creepy and I loved the imagery of the river and the gates that spirits pass through after death. Creatures often try to travel back up the river, through the veil and into life again but it is the Abhorsen's job to make sure they don't manage to escape. Since her father is missing that role now falls to Sabriel and she must use the Abhorsen's bells and sword to fight the spirits that try to escape.

Sabriel is a wonderful heroine, she is smart, brave and cares passionately about people. She is willing to put her own life at risk to save not just the people she cares about but also strangers and it is easy to admire her bravery. She isn't perfect and does make mistakes but that just makes her even more likeable and easy to root for. One of my favourite fictional characters ever is Mogget, the cat who has served her family for centuries. Mogget has a very sarcastic sense of humour and he often has me laughing at the things he comes out with. As irritating as Mogget can be to Sabriel most of the time he is an important ally for her but there is a darker and more terrifying side to him that Sabriel quickly discovers. The other main character is a young man called Touchstone, his background remains a mystery for quite some time but he is easy to like once you start uncovering some of his secrets. I enjoyed the hint of romance between Touchstone and Sabriel, it doesn't overtake the rest of the story but adds a nice extra dimension between them. There aren't many central characters in this book but they are all incredibly three dimensional and you'll feel like they're part of your family by the end of the story.

I don't want to say too much more about the plot but I will say that anyone who hasn't discovered this series yet is missing out. I was a little nervous when I started this reread because I have such fond memories of this series - I was really worried that it wouldn't be able to stand the test of time and that perhaps it wouldn't reach the standards of some of the more recent YA fantasy series that I've read in the last couple of years. I'm so happy that my fears were proved wrong - this book more than stands it's ground and I can say without reservation that it remains my favourite in this genre. I can't wait to carry on my series reread and to finally get hold of the new book Clairel that we have waited such a long time for!