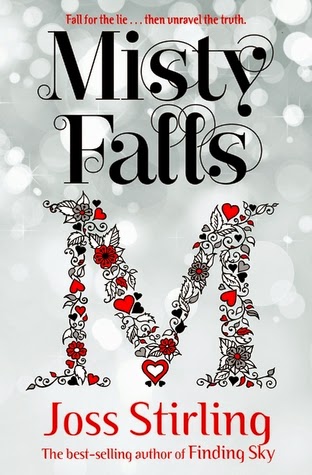 Misty is a one-girl disaster zone. Born with a Savant 'gift' that means she can never tell a lie, her compulsive truth-telling gets her into trouble wherever she goes.

So when she meets Alex: gorgeous, confident, and impossibly charming, Misty instantly resolves to keep her distance . . . Someone so perfect could never be hers, surely?

But a dark shadow has fallen across the Savant community. A serial killer is stalking young people who have these special mental powers. Soon one of them will be taken to the edge of death . . . and beyond.

Review:
I love Joss Stirling's Savants series and was excited when I found out she was planning another three books set in the same world. I'll admit I was a little disappointed when I realised that the hero of Misty Falls wasn't one of the Benedict brothers though, I've become so invested in the family and was worried that things wouldn't be the same without them. Thankfully my fears were over nothing because although the Benedicts aren't the main characters here we still see plenty of the previous couples and we even get to see Uriel meeting his soulfinder! I'm actually quite glad that we're getting new characters and families introduced because I think it's going to give the series some fresh blood so to speak.

I can't remember if we met Misty in the previous books but she is Crystal's niece and because of that family connection she is friends with most of the characters we've already met. The story sees Misty travel to South Africa for the summer to visit family and she is travelling with Uriel because he is going to search for his soulfinder who he knows is in Cape Town thanks to Crystal's Savant ability. Misty has a very interesting Savant ability that means she is incapable of lying, she can't even tell a white lie to spare a friend's feelings and she always knows if people aren't telling her the truth. If she doesn't keep a tight reign on her ability people around her will find themselves suddenly blurting out their secrets and the things they most desperately want to keep hidden and I'm sure you can imagine what kind of trouble that gets her into. Misty is a fantastic character and she was constantly saying or doing things that were hilarious, she would try so hard not to hurt people's feelings but she had no choice in the matter and I laughed a lot at the things she ended up blurting out almost against her will.

When she meets Alex it is pretty much hate at first sight on his part, his ability allows him to charm anyone he talks to but because Misty forces him to be honest it reacts badly with his powers and he suddenly finds he isn't able to talk people around to his way of thinking. Misty doesn't really understand why Alex seems so dead set against her but she's also convinced that he would never look twice at someone as socially inept as she is. I enjoyed the antagonism between the two characters but was pleased when they finally figured out what was really going on. Because of the whole soulfinder thing the characters in this series do tend to fall in love very quickly but although I normally hate insta-love for some reason it's never bothered me in these books. I just have so much fun reading them that I don't mind how quickly things happen.

I don't want to say too much about the rest of the plot but there is a lot more to this story than a romance. Uriel may be searching for his soulfinder but he is also investigating a serial killer who is targeting savant teenagers. Misty inadvertently catches the attention of the murderer and it becomes a race against time to see whether she will be his next victim. The mystery was good, the story moves at a fast pace and Misty Falls was a very quick, light hearted and funny read. I loved getting to meet a whole new bunch of Savant characters and learning about all kinds of different abilities they had. I have a feeling that Misty's two best friends may end up being the future heroines in the rest of the series but I hope we get to see more of Misty's cousins and I'm sure the Benedict's will all be there on the sidelines.

Source: Received from OUP in exchange for an honest review