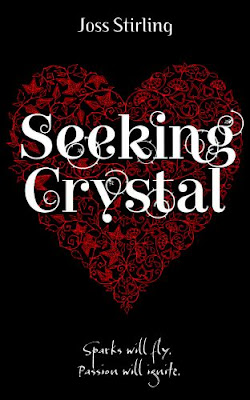 Crystal Brook has always been the dud Savant in her family; paranormal powers just aren't her thing. Dropping out of school with a clutch of 'E' grades and no future, she lives in the shadow of her high-flying sister Diamond.

On a trip to Denver, a chance encounter with the dashing Benedict brothers leaves Diamond head over heels in love and engaged to be married. Crystal, on the other hand, is unimpressed by their charms . . . in fact no boy can annoy her as much as Xav Benedict!

Back in Venice, their families assemble for Diamond's wedding and a powerful enemy seizes the opportunity to attack. Crystal and Xav must join forces to save their loved-ones, unlocking a secret that, until now, has lain deeply buried . . .

Review:
Crystal comes from a large family of Savants but she has always felt like a failure compared to her brothers and sisters, she is the only one who isn't able to communicate telepathically and she has the most useless Savant ability ever. The only thing she is any good at is finding things that people have lost - so she's the person who her family turn to when they lose their car keys but not for much else. Crystal has travelled to Denver with her sister Diamond for a conference arranged by the Benedicts and it is there that Diamond immediately recognises Trace as her Soulfinder and the couple are quickly engaged to be married. Back at their home in Venice Crystal is in charge of organising Diamond's hen party and she is in competition with Trace's brother Xav for who can come up with the best night out. Xav and Crystal have taken an instant dislike for each other but when the family come under attack and several of the Soulfinders are taken hostage it is up to the two of them to figure out how to save the others.

I'm a massive fan of this series so have been looking forward to reading Seeking Crystal for ages now and I'm pleased to say that it was everything I hoped it would be. Fans of the series are sure to enjoy this instalment just as much as the previous ones and I'm really hoping that this isn't the last we have seen of the Benedicts - please someone tell me there will be another book! The romance between Diamond and Trace does move incredibly quickly but as they aren't the main characters for this book I felt that was understandable. Especially when you consider that they are both much older than Crystal and Xav so have been waiting a long time for their Soulfinder to come along, knowing full well that they might never find them. It made sense to me that they would accept their relationship much faster, they are both confident in who and what they are and are delighted to find the missing piece of themselves.

Crystal wasn't always the easiest character to like, at times she could be very childish and I got frustrated with her and the temper tantrums she threw but at the same time I could understand why she was so upset. She has spent her whole life feeling like she is useless and when she finally finds something that she thinks she could be good at her family are completely against the idea. I did feel that Diamond and Trace could have done a much better job of explaining to her why modelling wasn't such a great idea but she worked it out for herself eventually. When things start to go wrong and Diamond and other family members disappear Crystal really does step up to the plate and show how strong she can be. I loved the developments with her abilities and think that will add a really interesting element to any future books we might see.

I really liked Xav, he could be cocky and arrogant but he often tended to put on an act and deep down he was a really nice guy. He knew how to push Crystal's buttons and went out of his way to irritate her but that was just his way of teasing the newest member of his family. It was obvious from the beginning that they were attracted to each other but not believing they were Soulfinders meant there was no point in pursuing things further. Xav's power as a healer makes him very protective of everyone around him, he wants to be able to keep everyone safe and finds it distressing that he was unable to stop his family members being hurt. I really loved the banter between Xav and Crystal, the way they constantly snipped at each other was fun to watch but they grew to respect each other when they started working together.

I loved the Venice setting for this story, the previous books were set in Denver and London so it was nice to visit somewhere different. I've never been to Venice (it's somewhere I always wanted to go) but the descriptions were so well done that it really felt like I was there and I was able to picture things very clearly. I have to say that the plot of Seeking Crystal was the best of the series so far, the story was fast paced, action packed and included some great new side characters. We also got to see some of the previous characters which was nice although the circumstances didn't allow us to catch up with the girls as much as I would have liked. I loved getting to see the Benedict boys all working so well together though, they certainly prove themselves a force to be reckoned with! I'd definitely recommend this series to fans of YA paranormal romance, I think you could probably get away with reading this as a standalone novel but personally I think the series works much better if you read them in order. If you've not already read Finding Sky and Stealing Phoenix then you really don't know what you're missing.

Source: Received from OUP in exchange for an honest review