I'm very excited to be taking part in the cover reveal for Kellie Sheridan's debut novel Mortality today. Mortality is being published early in 2013 and I can't wait to read it. I love a good apocalypse, especially one with zombies! 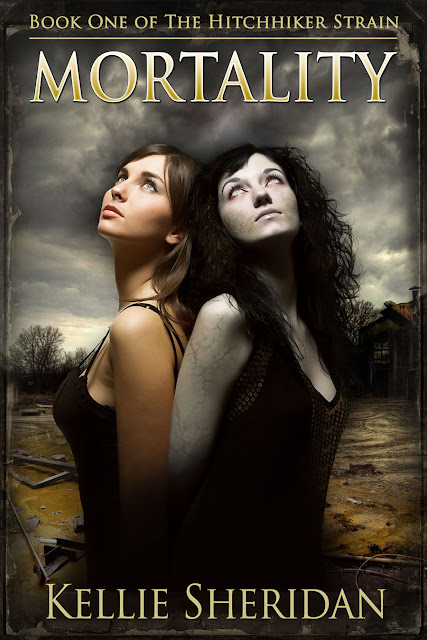 Blurb:
After surviving a deadly plague outbreak, sixteen-year-old Savannah thought she had lived through the very worst of human history. There was no way to know that the miracle vaccine would put everyone at risk for a fate worse than un-death.

Now, two very different kinds of infected walk the Earth, intent on nothing but feeding and destroying what little remains of civilization. When the inoculated are bitten, infection means watching on in silent horror as self-control disappears and the idea of feasting on loved ones becomes increasingly hard to ignore.

Starving and forced to live inside of the abandoned high school, all Savannah wants is the chance to fight back. When a strange boy arrives with a plan to set everything right, she gets her chance. Meeting Cole changes everything. Mere survival will never be enough.

What do you think of the Mortality cover and blurb? Is this book on your wish list?

Kellie is also offering a fabulous international giveaway as part of the cover reveal. For your chance to win the following prizes enter using the Rafflecopter form below.

Prizes: A digital ARC of Mortality (any format, sent to winner when ARCs are released), a paperback of As The World Dies by Rhiannon Frater, 2 zombie pins from Custom Curiosities (http://www.etsy.com/shop/CustomCuriosities?ga_search_query=zombie) and The Walking Dead: Days Gone Bye v. 1

The giveaway is open internationally to anywhere that The Book Depository ships to and is open for entries until the 14th of December. The winner will be chosen at random from all entries received and contacted directly by Kellie Sheridan regarding the prizes.