Review: Under the Mistletoe - Jill Shalvis 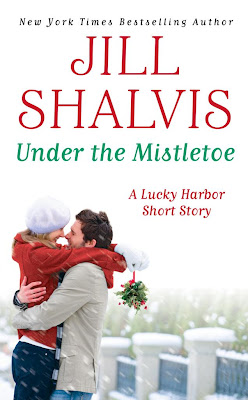 There's no place like home for the holidays. And the Lucky Harbor Bed & Breakfast is bursting with festive lights and good cheer. But for Mia, Christmas is turning out to be anything other than merry and bright. Her recent break-up with her boyfriend Nick has made her return bittersweet. But then a surprise arrives, when Nick follows her to town bearing gifts-and asking for forgiveness.

Nick grew up without a family of his own so he's overwhelmed by the love that Mia receives from all her relatives, gathered together to celebrate the season. Under their watchful eyes, Nick finds earning back her trust the hardest thing he's ever had to do. If he succeeds, he will receive the greatest gift of all, Mia's love for a lifetime.

Lucky Harbor Series:
Simply Irresistible
The Sweetest Thing
Kissing Santa Claus (Novella in the Small Town Christmas anthology)
Head Over Heels
Lucky in Love
At Last
Forever and a Day
Under the Mistletoe (Novella)
It Had to be You (2013)
Always on my Mind (2013)
Once in a Lifetime (2014)

Review:
I love the Lucky Harbor series and I really liked Mia when we first met her as a confused teenager in The Sweetest Thing. It was great to see her build a connection with her birth parents Tara and Ford previously and I was pleased to find out that we were getting more of Mia's story now that she's an adult in this novella. Under the Mistletoe is set around 5 years on from Chloe and Sawyer's story (Head Over Heels). Mia is now a student in New York and is heading back to Lucky Harbor for the holidays and to attend Chloe & Sawyer's wedding. She is looking forward to spending Christmas with her extended family but her only disappointment is that her boyfriend Nick refused to go with her. Her devastation over their breakup threatens to ruin her holiday but when Nick arrives in Lucky Harbor begging her for forgiveness she could find all her dreams are about to come true.

Nick and Mia were both given up for adoption when they were babies but unlike Mia, who was adopted by a loving family and who has since reconnected with her birth parents, Nick spent his childhood bouncing between different children's homes and foster families. He has never known what it is like to have a normal loving family and doesn't know how to react when Mia invites him to spend Christmas with her and her parents. I have to admit I felt a bit sorry for Nick the way Mia landed the idea of him coming to Lucky Harbor with her right at the last minute. She hands him a plane ticket for the very next day and expects him to drop everything to come with her and then because he panics and doesn't instantly agree she gives up on him completely. Really I would have expected Mia to be a little more understanding than that, especially when they haven't really been dating that long and she knows all about his history and the effect it has had on him.

I actually thought that Nick was a really sweet and caring guy, yes he upset Mia by his instant refusal to meet her family but I found it easy to forgive him, particularly when he realises he was wrong so quickly and immediately sets out to win her back. It must have been incredibly intimidating for him to face down not just Mia but also Tara & Ford, her aunts and uncles (Maddie, Jax, Chloe and Sawyer) not to mention her ex-boyfriend Carlos too. Nick is willing to man up though and he will do whatever it takes to win back the love of his life.

Under the Mistletoe is a nice addition to the Lucky Harbor series and my only complaint is that I wish it was longer. It was great to catch up with the couples from the first three books and see how they are getting on now and I was really excited that we were going to see Chloe and Sawyers wedding but I have to admit I was disappointed that it was only mentioned briefly. I understand that this was Mia's story but it would have been nice to have had more of the other characters too. Having said that there is only so much you can fit into a novella and I did enjoy Mia and Nick's story, their romance was sweet and I was happy with the way things ended. If you're a fan of the series and enjoyed meeting Mia in Tara and Ford's book then this is a must read.

Other Reviews:
If you have reviewed this book on your blog please leave a link to your review in the comments & I'll add the link here.
at 12:00