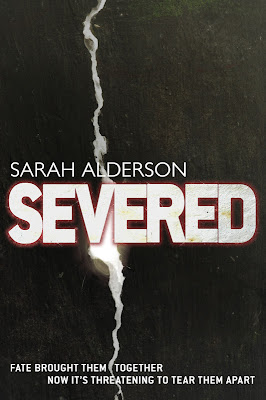 Fate brought them together.
Now it’s threatening to tear them apart.

As the last in a long line of demon slayers, Evie’s destiny is to end the war that has raged for centuries between humans and demons.

Lucas, the half-Shadow Warrior half-human who was sent to kill her, has betrayed his own Brotherhood and his family to fight alongside her.

With an army of unhumans on their tail, Evie and Lucas are forced into an uneasy alliance with a group of rogue Hunters who offer protection and the promise of answers.

…More than realms will be severed.

Review:
So it's no secret that I'm a massive fan of everything that Sarah Alderson writes and I loved Fated when I first read it last year. At the time I had high hopes for it to turn into a series so I couldn't have been more excited when I found out that Sarah had written two more books about Evie and Lucas. Anyone who enjoyed Fated will be pleased to know that Severed is even better - there is more action, more intrigue, more danger and of course more romance. We also get to meet some interesting new characters at the same time as we're catching up with some of the ones we've already met.

Severed picks up the story just after the ending of the previous book, Lucas and Evie went against everything they were taught in order to be together and are now on the run. It wasn't so hard for Evie to choose Lucas as she has only recently learnt that she is a hunter and she has very good reasons not to trust the people who were keeping secrets from her for her entire life. It has been much harder for Lucas to leave behind the other unhumans that he grew up with though, people who he considers his friends are now treating him like the enemy but he can't walk away from Evie and the feelings he has for her. The two of them aren't strong enough to fight a whole army on their own though and end up turning to a group of rogue hunters for help. There is understandable tension between Lucas and the hunters but they'll have to learn to trust each other if they are going to stop everything that is coming for them.

Evie has been through a lot since she the night she was attacked by unhumans and discovered her hunter heritage, she has been betrayed by the people she should have been able to trust most, she has found with love with someone who is supposed to be her enemy and now she is dropped back into the middle of the action as both sides seem to want something that only she can give them. One of the things I liked most about her in the first book was the way she didn't take what anyone told her at face value, she always went out of her way to verify things for herself and make sure her information was correct. I'm pleased to say that this is something that continues into this book and she has only grown stronger and more determined as she learns more about the supernatural world. Her relationship with Lucas did start very quickly but they spend more time getting to know each other in this instalment and they work really well as a team, ultimately they both respect each other though which is something I think is really important. I do love the romance between them and they make such a cute couple!

I already loved Lucas but I now have an even bigger crush on him than before. He is so caring towards Evie and he constantly puts her needs and safety before his own. It took a lot of guts for him to go against his upbringing and realise that Evie wasn't a normal hunter and he earned my respect for that. Now that we've got to know him a bit better he doesn't have quite such a bad boy feel to him and I think that's mainly because he's no longer keeping secrets from Evie about who and what he is. That doesn't make him any less sexy though and these two have great chemistry. Lucas has a bit of competition when they meet up with the rogue Hunters though, new boy Cyrus seems quite determined to take his place in Evie's affections. Cyrus can be very arrogant and was at times a little overbearing but I loved the way he constantly teased Evie and added a lighter note to the story. As much as he comes across as a bit of a playboy I think deep down he is actually quite a sweet guy and although he didn't overtake Lucas in my affections I did develop a bit of a crush on him too. You're just going to have to read the book to see who Evie likes best though!

Severed is a fantastic follow up to Fated and was full of edge of your seat action. The plot is fast paced and fraught with danger and OMG that ending was a shocker for more than one reason! I literally could not believe what happened and I still can't believe that Sarah Alderson could leave us with that cliffhanger! The only reason I'm going to forgive her is that the third and final book Shadowed is due to be released early in 2013, if I had to wait a whole year to find out what was going to happen next I would have cried. I literally can't wait to get my hands on Shadowed, as soon as I get hold of a copy it will be jumping right to the top of my to read pile because I just have to know how Evie's story is going to end. If you haven't started this series yet then I'd highly recommend reading the books in order but they're a must for any YA urban fantasy fan who likes action packed stories with dangerous demons and more than a little romance.