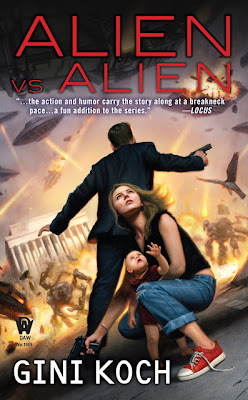 Jeff and Kitty Katt-Martini and the rest of the American Centaurion Diplomatic Corps are still recovering from their introduction to Washington D.C. politics, parties, and conspiracies. So when compromising pictures arrive, no one's too surprised. They're also the least of anyone's worries.

Evil androids running amok, birds of all kinds and from all places creating havoc, a senator trapped in an ever-tightening web of intrigue, and escalating international tensions all seem tough but manageable. But the disappearance of Jeff Martini and Charles Reynolds during the International One World Festival signals more than the usual nastiness - and it looks like even ACE can't help them.

Then new trouble arrives in old packages and even with the best hackers in the world, beings from near and far, the full might of Earth's military, and the Wonder Twins on their side, Centaurion Division's outmanned and outgunned.

Now Kitty's racing against the clock to find not only Jeff and Chuckie, but to keep the peace between Middle Eastern countries, all while searching for the bases of supersoldier operations - to stop them or die trying.

Review:
Kitty and Jeff have started to settle into their new roles as the Alpha Centaurion Diplomats, a career in Washington politics may not have been something Kitty has always dreamed of but she can fake it with the best of them and she's becoming an expert at dealing with both politicians and reporters. If they were normal diplomats then photos showing Kitty in a compromising position with her best friend Chuckie might spell out disaster but they're actually the least of Kitty & Jeff's worries. What with android attacks, more superbeings than they can reasonably cope with and an interesting arrival giving the Poofs a run for their money tension levels in the embassy are high. And that was before Jeff and Chuckie vanish without a trace! Kitty must juggle crooked senators, blackmail attempts, an impending alien invasion and keeping her baby safe while at the same time tracking down the two most important men in her life before their kidnappers can do them irreparable harm. Pretty much a normal day then, but this time she has to do it without the help of Jeff and Chuckie.

I've been a massive fan of Gini Koch's Katherine "Kitty" Katt series ever since I picked up Touched by an Alien last year. In fact it is one of my favourites - one of those series that I pre-order each instalment as soon as it becomes available on Amazon and one that I drop everything else to read as soon as I have the book in my hands. So I can't tell you how excited I was when Gini offered to send me and advanced review copy of Alien vs. Alien, I literally could not wait to start reading it! I had incredibly high expectations for the sixth book in the series but I'm happy to say that Gini not only met them - she surpassed them.

Fans of the series will know exactly what to expect when picking up one of Gini Koch's books. Her trademark humour, action packed story lines and shocking twists make for an edge of the seat thrill ride that will leave you breathless. Alien vs. Alien has all of that and then some and picking up any book in this series like sitting down with old friends for a catch up. I'm immediately sucked into Kitty's world and I'm irritated when real life gets in the way and stops me from reading. I was worried that Kitty and Jeff would have less drama and action in their lives now they're working as diplomats rather than heading up operations but if anything their lives have just got even more complicated. The threats are coming from so many different directions that it is hard to tell which enemy poses the greatest danger to them.

It was strange to see Kitty without Jeff by her side but I really enjoyed watching her prove herself a force to be reckoned with. Nobody is going to get away with taking Jeff from her and she is just as protective of her best friend Chuckie. Thankfully she still has plenty of people she can rely on, I love her working partnership with Richard but of course she still has Chris, Reader and the flyboys to back her up as needed. Without a doubt it is Kitty's wacky way of looking at things that is going to save the day though. I have been a fan of the Poofs since they were first introduced to the series but all I'm going to say is watch out for the latest delivery from Alpha Centaurion, it's guaranteed to make you laugh out loud. That and the new "woman" who is competing with Kitty for Jeff's affection! Alien vs. Alien is a fab instalment to a fantastic series and I'm already dying to get my hands on Alien in the House for my next Martini fix. If you're already a fan of the series then you need to get hold of this book immediately - if you haven't started reading it yet then you really don't know what you're missing.