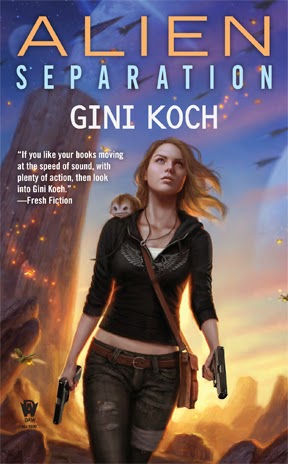 The Mastermind has finally been identified, but before Jeff and Kitty Katt-Martini can take him down, they, their daughter Jamie, Charles Reynolds, Paul Gower, Christopher White, and several others are zappe out of their solar system and into another.

Landing in scattered groups on various areas of Beta Eight in the Alpha Centauri system means getting the team back together will be a major issue. But it's only one of the challenges they'll face. Kitty and Company have to forge alliances with the wide variety of sentient natives on the planet while plotting to create a civil war and overthrow the king - who just may be a clone of one of their bitterest enemies, Ronaldo Al Dejahl.

Of course, to do this, they have to overcome an assortment of dangerous obstacles, protect a group of refugees, take mind reading lessons, and seek out unexpected new allies as they journey to the Centerpoint of the world.

And once they reach the All Seeing Mountain, new issues and surprises await. Because there's more than a small war going on - they're in the midst of the Alpha Centauri Civil War!

Review:
I've been a huge fan of this series since the very beginning and one of the things I love most about it is that you never know what crazy kind of situation Gini Koch is going to dream up next. She is brilliant building complex and compelling plots that evolve masterfully across the entire series but she also has the most amazing imagination and I really never know what to expect when I pick up one of her books. What I can guarantee is that it will always be hilariously funny, full of action and crazy antics and introduce us to a whole host of fabulous new characters.

If you're reading this review I'm going to assume you're up to date with the series so if you aren't please be aware that there may be spoilers for previous books. For a long time now we have known that there was a Mastermind at play, someone who was orchestrating everything that has gone wrong for Kitty and the rest of her team, but it wasn't until Universal Alien that we finally discovered who that Mastermind was. I have to admit I fully expected Alien Separation to be all about Kitty revealing the news to the rest of her allies and them coming up with a plan to take the Mastermind down so I was a little surprised with the way things turned out. Not because I didn't love the story but because once again Gini Koch managed to drop me down a rabbit hole completely unprepared!

I'm actually going to be deliberately vague when I talk about Alien Separation, I picked it up and started reading without even reading the blurb (this series gets an automatic jump to the top of my to read pile no matter what the description says) and I think I enjoyed it even more because I had no clue what to expect. What I will say is that Kitty and her usual sidekicks are all on top form, they're in the middle of several conspiracies, they make some surprising new allies, kick the butts of some old foes and generally bring peace to the galaxy. It's all in a day's work for these guys! Things are definitely building to a head though, the Mastermind's days are numbered and I can't wait to see how Kitty and co manage to bring them down. I'm completely addicted to this series and I'm just thankful that Gini Koch is such a prolific writer and so I won't have to wait too long for the next instalment.