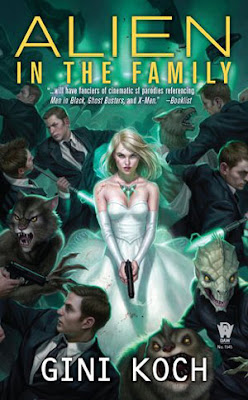 Planning any wedding is hard enough, but Katherine "Kitty" Katt and Jeff Martini have a lot more to worry about that seating arrangements, because multiple inter-stellar invasions, Alpha Team in mortal peril, and inter-alien conspiracies are all on the guest list - and the gifts they've brought contain some explosive surprises.

Kitty and Martini should be happily finalising their wedding plans. Kitty's biggest worries should be about winning over Martini's mother, finding the right dress, and lining up her bridesmaids. But protecting the Earth from assorted aliens threats seems to keep getting in the way.

The discovery that Martini is actually a member of the Alpha Centaurion Royal Family brings additional bad news - emissaries are on their way to see if Kitty's royal bride material. And they're not the only things coming from the Alpha Centauri system. Amazonian assassins, spies, alien beasties, shape-shifters, and representatives from the Planetary Council, combined with a tabloid reporter who's a little too on the mark, create a deadly situation for Kitty and the rest of Alpha Team. When the assassins strike far too close to home for anyone's comfort, Kitty realises it's going to come down to more than throwing the bouquet - she's going to have to face an entire planetary consciousness and dethrone a monarch in order to make it to the church on time....

Review:
Alien in the Family continues the story six months on from the ending of Alien Tango, Kitty and Martini's relationship is stronger than ever and they are in the middle of planning their wedding. Their only worry should be how to keep the fact that Martini's family are all aliens a secret from Kitty's family but their lives are never that simple. It turns out that Martini is in fact a member of the Alpha Centaurion Royal Family and they're about to have visitors who want to make sure Kitty is a suitable wife for him. They aren't the only new additions to the guest list though, members of the Planetary Council are also on their way and things are about to get complicated!

If you've read any of my previous reviews for this series you'll already know that I've become a massive fan of Gini Koch - it's been a while since a new series hooked me in quite so quickly. I'm not sure how Gini does it but the series just keeps on getting better and better with each new instalment. To say Alien in the Family is action packed is an understatement, the surprises just keep coming and it makes for an addictive read. When I pick up one of these books I have to know I've got plenty of time to read - I can easily devour each book in one sitting and find them nearly impossible to put down once I get started.

I don't want to give spoilers by telling you any more about the plot so I'm just going to say if you love Kitty, Martini and the gang you're going to love this instalment. There are some fantastically sweet moments between Kitty & Martini, I love the friendship between Kitty & Reader and Kitty gets some fab new pets (OMG I want a Poof of my own!). Along with the team we know and love we are also introduced to some great new characters, Kitty gets to meet her alien soul sister and she also adds some new members to the airborn crew.

This story made me laugh and cry, it was an emotional roller coaster and I loved every minute of it. It's going to be a long wait until Alien Proliferation comes out in December and I know it will be a book I devour as soon as I can get my hands on a copy. Kitty and Martini remain one of my favourite fictional couples and I'm already looking forward to their next adventure. In the meantime I feel a re-read coming on! If you're yet to discover this series don't let the science fiction label put you off, if you're an urban fantasy fan who enjoys a fast paced story line with sexy characters and non-stop action then you'll adore these books!