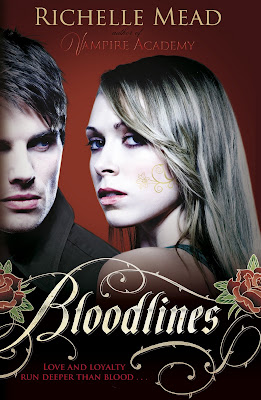 Sydney belongs to a secret group who dabble in magic and serve to bridge the world of humans and vampires.

But when Sydney is torn from her bed in the middle of the night, she fears she's still being punished for her complicated alliance with dhampir Rose Hathaway. What unfolds is far worse. The sister of Moroi queen Lissa Dragomir is in mortal danger, and goes into hiding. Now Sydney must act as her protector.

The last thing Sydney wants is to be accused of sympathising with vampires. And now she has to live with one . . .

Bloodlines Series: (This is a spin off from the Vampire Academy Series)
Adrian's Lost Chapter (Free Short Story can be read here)
Bloodlines
The Golden Lily
The Indigo Spell
The Fiery Heart (Release date to be confirmed)

Review:
I'm a massive fan of Richelle Mead's Vampire Academy series, in fact I think I'd go as far to say that it is my favourite YA series so of course I couldn't wait to get my hands on Bloodlines, the first book in the new spin off series. I'm going to start this review by saying that if you haven't read the Vampire Academy books yet then I would highly recommend reading those before picking up Bloodlines, if you don't you'll pick up major spoilers by reading this book first and you honestly don't want to miss out on the joy of reading the VA books without spoilers. Although this review won't contain spoilers for Bloodlines I don't think I can avoid them for Last Sacrifice and the other VA books so you might not want to read any further if you're not up to date with the series.

Now I've got that out of the way lets get on with my review of Bloodlines. I have to admit that I was a bit nervous when I first picked up the book, I wasn't a massive fan of Sydney in the VA series and wasn't sure how I'd get on with reading the story from her point of view. I was pleasantly surprised though, I'd always considered Sydney to be quite a weak character but it becomes clear from quite early on how difficult her life is and the consequences that she has been facing since helping Rose. She knew exactly what would happen to her but went ahead and helped anyway, partly because of Abe's blackmail, but mostly because she knew she was doing the right thing. You have to be quite brave to go against everything you've ever been taught and grown up believing, especially knowing full well what you'll have to face in the aftermath so I have to give Sydney her dues for that.

I loved getting to see more of Adrian, he hasn't been coping with the break up of his relationship with Rose very well and typically for him has been trying to push aside his feelings by drinking to excess. He has a lot of growing up to do but we do see him start to make some progress and he really does step up towards the end of the book. Although I was firmly on team Dimitri throughout the VA series Adrian really grew on me towards the end and I felt really badly for him after the way Rose treated him so I'm glad we might finally get to see him have his own happy ending. I thought that Jill was going to have a larger role to play in Bloodlines but there are actually so many other things going on that she takes a bit of a back seat in this one, I have a feeling she's going to be in for a bit of a rough ride as the series progresses though.

As I've come to expect from Richelle Mead the plot line is strong and although I did manage to guess a couple of the twists there was still plenty that took me by surprise. The action towards the end was incredibly fast paced and edge of your seat stuff and those last couple of lines had me jumping with joy and left me breathless with anticipation for The Golden Lily.

The one thing that stopped this from being a 5 star read was the way Sydney was constantly referring to herself as fat and frumpy. She was complaining that she had to get her uniform in a size 4 rather than her usual size 2 and saying that she needed to eat less. Now I may have this wrong but I believe a US size 4 is a UK size 6 and I was concerned at the message this is sending out to teenage readers. Size 6 is tiny and unachievable for a lot of people so it distressed me that Sydney considered herself fat. Putting that issue to one side though I thought Bloodlines was a strong start to the new series and I think it has the potential to be right up there with VA as one of my favourites. I can't wait to get my hands on the next book and would highly recommend the series to any VA fans.

Source: Received for review from Penguin in exchange for an honest review