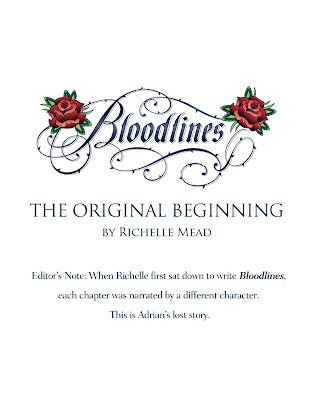 A glimpse at the original scrapped first chapter, which is told from Adrian's POV.

Originally, Bloodlines was going to be told from a few different characters' points of view. It was going to be in third person and alternate characters each chapter. A few chapters in, problems were emerging from this (you've got to trust me on that!).

I ended up starting completely over and simply doing the entire book from just Sydney's point of view in first person (the "I" voice). The all-Sydney version is what you're going to get when the book hits the shelves August 23.

Hope that clears things up!
Description taken from Goodreads

Bloodlines Series: (This is a spin off from the Vampire Academy Series)
Adrian's Lost Chapter (Free Short Story can be read here)
Bloodlines
The Golden Lily
The Indigo Spell
The Fiery Heart (Release date to be confirmed)

Review:
When Richelle Mead originally started writing Bloodlines she planned on writing the story from several points of view, starting off with Adrian.  In the end she re-wrote the book purely from Sydney's POV but has released the original version of the first chapter as a free online read for her fans.

Although Adrian's Lost Chapter is only 8 pages long I really enjoyed getting to see part of the story from his POV.  I don't really want to go into plot details as you can read the whole story yourself if you have a spare 5 minutes but this was a nice way of getting to know Adrian a little better.  You can't help but feel for him after his treatment from Rose, although I was routing for Rose and Dimitri to end up together for the whole Vampire Academy series I did feel bad for Adrian about how things turned out for him.

If you're a fan of the VA & Bloodlines series then I'm sure you'll enjoy this quick, free read.  Yes, there are some editing problems, yes, it could have been a much longer story BUT I love it when authors give a little something back to their fans with a free story.

Source: This is a free short story that can be found online here

Bloodlines - Original Chapter One
at 09:00