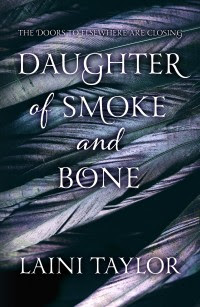 The note was on vellum, pierced by the talons of the almost-crow that delivered it.  Karou read the message.  'He never says please', she sighed, but she gathered up her things.  When Brimstone called, she always came.

In general, Karou has managed to keep her two lives in balance.  On the one hand, she's a seventeen-year-old art student in Prague; on the other, errand-girl to a monstrous creature who is the closest thing she has to family.  Raised half in our world, half in 'Elsewhere', she has never understood Brimstone's dark work - buying teeth from hunters and murderers - nor how she came into his keeping.  She is a secret even to herself, plagued by the sensation that she isn't whole.

Now the doors to Elsewhere are closing, and Karou must choose between the safety of her human life and the dangers of a war-ravaged world that may hold the answers she has always sought.

Review:
Karou has spent years living a double life, on the one hand she is an art student studying in Prague and on the other she runs errands for a demon. She works hard to keep the two sides of her life separate but it isn't easy juggling her responsibilities - especially when Brimstone regularly makes her drop everything because he has a task for her. Brimstone is a wishmonger who collects teeth in exchange for wishes, he raised Karou from a baby but has always kept her origins a secret from her. With the doors to Elsewhere mysteriously closing Karou must choose between her human life and the demon family who brought her up.

I've said before that I get nervous picking up a book that has a lot of hype around it, so many times I have found myself disappointed by the story and not enjoying it as much as I expected to. I can tell you straight away that didn't happen with Daughter of Smoke and Bone, now I've read it I can confirm that it totally lives up to the hype! In fact it surpassed all my expectations and is currently my top read of 2011, it's going to take a miracle to knock this one off the top spot!

Karou is now one of my favourite YA female protagonists, she is smart and strong but also slightly vulnerable. In her life as a student in Prague she has the same concerns and problems most teenagers face, she worries about her studies, spends time with her best friend Zuzana and has issues with her cheat of an ex boyfriend. The way she deals with the ex made me laugh out loud but I'm not going to spoil anything by telling you more so you'll have to read the book if you're curious. Karou has never felt like she fits in completely in either of her worlds so when she finds herself cut off from Brimstone's shop and the only family she has ever known she feels lost and alone. I loved the fact that she doesn't just sit around feeling sorry for herself though, she is determined to find out why the doors have closed and discover a way to get back to Elsewhere.

I also loved that there are no good guys or bad guys, well not in your usual shades of black and white anyway. Brimstone was absolutely terrifying at times but he isn't completely evil and although he does some abhorrent things he usually does them for the right reasons. Akiva is a stunning angel and I absolutely loved the romance between him and Karou but he isn't perfect and some of his behaviour is questionable at times. Like I said it's all shades of gray in this story. The romance has a feel of Romeo and Juliet with love developing between characters who should by rights be enemies but it was a joy to read and very believable.

There is so much more I want to say but I'm very wary of giving unintentional spoilers so I'm going to stop here. I don't think I can recommend this book highly enough, the writing is absolutely beautiful and Laini Taylor has created a rich world populated with unusual characters. The story is sure to be a hit with any fantasy fan and is definitely at the top of my recommendation list. Daughter of Smoke and Bone has everything I look for in a book - strong characters, a believable world, humour, romance, plenty of action and a few good twists along the way. It is a book to be savoured and one that will leave you breathlessly awaiting the sequel.