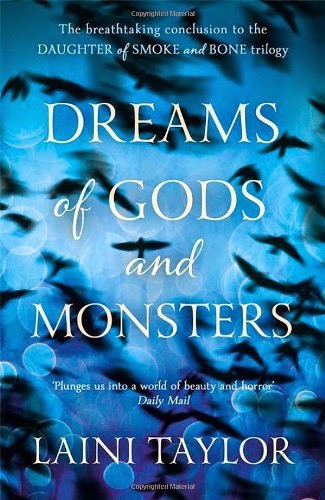 By way of a staggering deception, Karou has taken control of the chimaera rebellion and is intent on steering its course away from dead-end vengeance. The future rests on her, if there can even be a future for the chimaera in war-ravaged Eretz.

When Jael's brutal seraph army trespasses into the human world, the unthinkable becomes essential, and Karou and Akiva must ally their enemy armies against the threat. It is a twisted version of their long-ago dream, and they begin to hope that it might forge a way forward for their people.

And, perhaps, for themselves. Toward a new way of living, and maybe even love.

But there are bigger threats than Jael in the offing. A vicious queen is hunting Akiva, and, in the skies of Eretz ... something is happening. Massive stains are spreading like bruises from horizon to horizon; the great winged stormhunters are gathering as if summoned, ceaselessly circling, and a deep sense of wrong pervades the world.

What power can bruise the sky?

From the streets of Rome to the caves of the Kirin and beyond, humans, chimaera and seraphim will fight, strive, love, and die in an epic theater that transcends good and evil, right and wrong, friend and enemy.

At the very barriers of space and time, what do gods and monsters dream of? And does anything else matter?

Review:
I absolutely adore Laini Taylor's writing style and I have devoured loved all of the books in this series like they were made of the most delicious, decadent chocolate. So it'll come as no surprise when I say that I had high expectations for the final book in the trilogy, in fact my expectations were so high that I was almost scared to start reading Dreams of Gods and Monsters because I was worried that there was no way it would be able to live up to them. I can't even begin to tell you how much it pains me to say this but unfortunately my fears did kind of come true.

I don't want to say that this was a horrible novel because it really, really wasn't BUT it didn't quite manage to reach the highs of the earlier books. It still has Laini Taylor's beautiful, descriptive writing and it still has the characters we've come to know and love so much but I did find the story dragged in places and there were actually times when I wanted to put the book down and walk away which is unheard of for me with this series. I was torn between giving this book a 3 and 4 star rating but the parts I loved I REALLY loved so I've been generous and gone with the higher number.

I have been rooting for Karou & Akiva since the very beginning but I was nervous that there was no way they would be able to find their way back to each other after everything they had both seen and done. There has been betrayal and hurt on both sides and it isn't going to be easy for either of them to get past that. Not to mention the fact that they're both on opposite sides of a war that has been raging for centuries. Even if they want to be together they would have to leave everyone else that they love and care about for that to happen, unless they can find a way to make the chimaera and angels work together. Now that both sides have a common enemy and both stand little chance of surviving unless they put their differences aside they are closer to a truce than they have ever been in the past but that doesn't mean putting aside over a thousand years of hatred is going to be easy and it's going to take a lot of patience on both sides if they are going to have a chance of success.

I absolutely loved the way the author brings the two sides together, it isn't an easy truce and there are times when I feared it wouldn't be successful but it is so cleverly written that it was believable that these enemies would be able to put the past behind them even if it is only temporarily. I loved seeing Karou and Akiva working together to achieve their goals, this is something they have dreamed of since they first met a whole lifetime ago and now it is finally within reach. The story contains heart-stopping action, some unexpected twists and moments that absolutely broke my heart. I was a sobbing, hysterical mess during some scenes and towards the end I was crying tears of happiness. Laini Taylor pulled on my heart strings for sure and it's the fact that she can make me so invested in the lives of her characters that made me go with the higher rating for this story.

It isn't only Karou and Akiva that I'm invested in though, I also absolutely adore Zuzana, Mik, Ziri, Issa and Liraz and was just as keen to see how things would play out for them too. It's unusual for a series to have so many side characters that I become attached to and I desperately wanted all of my favourites to get a happy ending. I fell more in love with these characters throughout this book seeing their loyalty to Karou, Akiva and each other. They are all willing to risk everything in the hope of achieving peace in Eretz and risks like that aren't always rewarded so I was incredibly nervous about how things would play out.

As you can see there was a lot to love about Dreams of Gods and Monsters so you're probably wondering why I was disappointed. I don't really want to dwell on the negative but I hated that so much of the story was told from the point of view of a complete stranger. Eliza's character seems to have been included here as a convenient way of tying certain plot threads together and it felt like she had been added on as an afterthought. I had no connection to her because I've not spent the previous two books getting to know her. Quite frankly I couldn't care less about her and the chapters that were from her point of view left me feeling bored and irritated. I wasn't interested in the pointless drama between her and a work colleague and I could have done without learning her family history. I just wanted to get back to Karou & Akiva or any of the other characters I love.

Towards the end of the book I also found myself getting incredibly irritated at the way things kept contriving to keep Karou and Akiva apart. The will they / won't they pull between them has kept me hooked throughout the whole series but there comes a point when it starts to get a little ridiculous and overdone. I just think there was a point at about three quarters of the way into the book where it would have been nice for things to come together for them. Then you add in the fact that the series doesn't really have an absolute resolution, although a lot of lose threads have been tied up to me it definitely felt that things have been left open for a sequel and I'm not quite sure how I feel about that. I just think if we hadn't had Eliza added to the mix we could have trimmed a good hundred or more (boring) pages from the story and also had a more resolved ending. If the story had been tightened up like that it would have been a much more gripping and addictive read and I think I'd probably have finished it in one sitting.

Like I said I don't want to dwell on the negative though because even though Dreams of Gods and Monsters wasn't my favourite book this is still one of my favourite series and Laini Taylor is definitely an amazing author. A not so good book from her is still better than most of the other books out there so when I rate this a 3.5 star read by her standards that's probably still the equivalent of 5 star books by many other authors. If you haven't started the series yet then I honestly can't recommend Daughter of Smoke and Bone highly enough, I reread the previous books before starting this one and I loved them even more the second time around. There is no doubt that I will buy anything Laini Taylor writes in the future, I can't think of another author who writes so beautifully and I'm excited to see what she comes up with next.