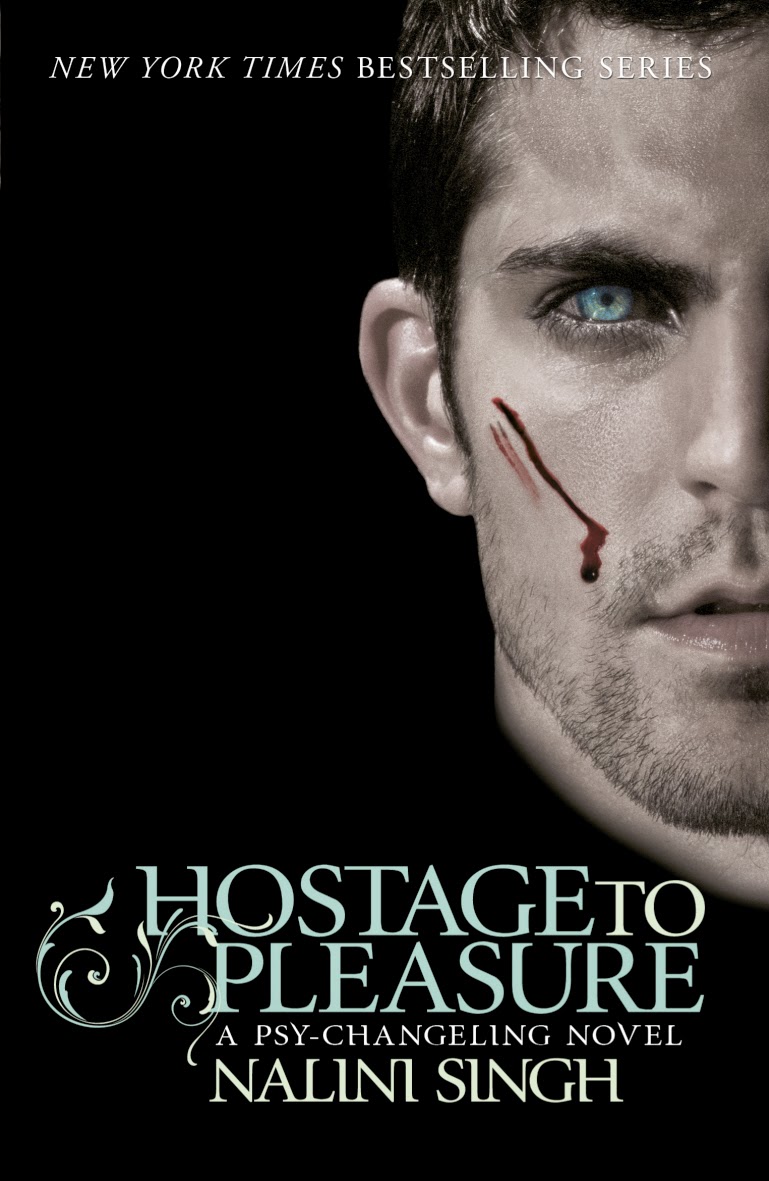 Separated from her son and tasked to create a neural implant that will mean the effective enslavement of her psychically gifted race, Ashaya Aleine is the perfect Psy - cool, calm, emotionless . . . at least on the surface. Inside, she's fighting a desperate battle to save her son and escape the vicious cold of the PsyNet. Yet when escape comes, it leads not to safety but to the lethal danger of a sniper's embrace.

DarkRiver sniper Dorian Christensen lost his sister to a Psy killer. Though he lacks the changeling ability to shift into animal form, his leopard lives within. And that leopard's rage at the brutal loss is a clawing darkness that hungers for vengeance. Falling for a Psy has never been on Dorian's agenda, But charged with protecting Ashaya and her son, he discovers that passion has a way of changing the rules . . .

Review:
I have been wanting to read Dorian's story ever since I first started reading the Psy-Changeling series, he's such a fantastic character and I couldn't wait to delve deeper into his background. Dorian is a leopard changeling but due to a genetic anomaly he has never been able to shift into his animal form. That hasn't stopped him becoming a well respected and powerful DarkRiver Sentinel though and although he can't change he is still incredibly strong both physically and mentally. Not many people would want to cross DarkRiver's top sniper! Dorian has more reason than most of the Changelings to hate the Psy, his sister was the victim of a Psy serial killer and he has never got over the guilt he feels for not protecting her. The last thing he wants is to be saddled with protection duty for the Psy Ashaya and her son Keenan but he will do his duty for the sake of the pack.

What Dorian doesn't expect is for his inner leopard to feel so possessive over Ashaya. The attraction he feels towards her seems like a betrayal of his sister and he fights it all the way. In fact I was a little disappointed in the way that Dorian treated Ashaya at times, he is so determined not to accept her as his mate and it makes him treat her quite badly in the beginning. I'm used to Dorian being such a charmer and I missed that about him. Don't get me wrong, we do see him turn on the charm in this book too but for a long time it was directed at other female members of the pack rather than his mate. I could understand why he felt the way he did though and I enjoyed seeing him come to terms with his feelings and slowly open up to Ashaya.

Ashaya is quite different to the previous Psy heroines in the series, she isn't quite as cold as they were in the beginning and she's already shown how much she cares for her son by risking her life to free him from Psy clutches. She has a very good reason to keep a lid on her emotions though, not just because of the training she has received since birth but also because of the connection she has to her twin sister. Her relationship with Amara adds an interesting dimension to the story and I really had no idea how Nalini Singh would be able to resolve the issues between them so the story kept me on the edge of my seat.

I really liked the slow build of the relationship between Dorian and Ashaya but I think one of my favourite things about the book was both of their interactions with her son Keenan. He was such a cutie and I loved that Dorian immediately took the little boy under his wings, there was no way he would have let anything hurt Keenan - not even his mother! Ashaya has had to keep her distance from Keenan emotionally because if anyone realised how important he was to her it would paint a target on his back. Although she has spent years pretending not to care about him Keenan knows it is just an act and he understands how much she loves him. It was great to see the pair of them learning how to express their affection though and Dorian really helped them with that.

Hostage to Pleasure is another fantastic instalment to the series and I can't wait to carry on reading these books. Nalini Singh has quickly become a favourite author and without a doubt anything she writes is automatically going on my pre-order list (I don't pre-order books by many authors so that is high praise from me!).