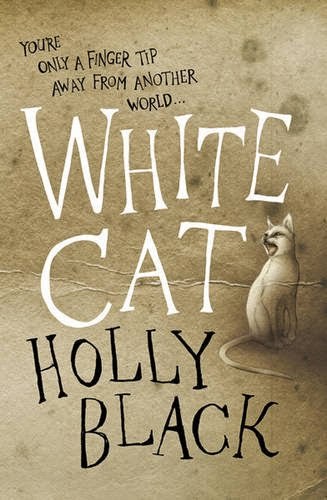 Cassel's family are magic workers. Ever since magic was prohibited in 1929 magic workers have been driven underground and into crime. His grand-dad is a black-fingered death-dealer, his mother is in prison and his brothers detest him as the only one of their family who can't do magic. But there is a secret at the centre of Cassel's family and he's about to inherit it. It's terrifying and that's the truth.

White Cat is the sensational new novel of a changed world and the price we have to pay for magic from the internationally bestselling author of The Spiderwick Chronicles.

Review:
People have been telling me to read White Cat for years but for some reason it had never quite reached the top of my to read pile. The only reason I'm not kicking myself now is that the entire trilogy is already available so I'm going to be able to binge on the whole series without having that horrible year long wait in between instalments! I finally know what all the fuss is about and White Cat is without a doubt a brilliant start to the Curse Workers series. I'm excited to spend more time in this world with Cassel and his family.

You've probably already read a million reviews for this series, in fact you've probably already read these books for yourself, but if you're one of the few people who has yet to discover this world then you're really missing out. Holly Black has created a world that is slightly different to our own, one where certain people are born with magical abilities. People with these abilities are known as Curse Workers and there are a range of different powers that Workers may have, anything from being able to give people luck, invade people's dreams, change their memories and emotions or even physically hurt or kill them. These powers usually run in families so although each family member may have a different ability it is unusual to be born to two Workers and not be a Worker yourself. Because of their abilities Workers are highly prized by the criminal underworld, the most powerful families have control and other Workers are often sought out to work for them.

Cassel is an anomaly, his family have all been Workers for generations, his grandfather, mother and both of his brothers all have strong abilities but Cassel has never been able to work curses. Because of that he is treated as an outsider by the others, they see him as someone who needs protecting and they refuse to share details of their abilities or the jobs that they undertake for the Zacharov crime syndicate. Cassel has never had a normal life, he may not have magic but he is a skilled con artist and has often helped his mother scam unsuspecting marks out of their money. Scamming comes as naturally to him as breathing but it also keeps him at a distance from others and ever since a terrible accident when he was a child he has never let anyone close enough to become his friend. He is about to uncover a secret though, one so terrible that it will tear his world apart and he's going to have to find some allies quickly if he wants to find a way out.

I can't tell you how much I enjoyed Holly Black's world building, the idea of Curse Workers is absolutely fascinating and I loved the fact that using their abilities has major repercussions for them. The characters are all fantastic (and how rare is it to find a male lead in YA?) and I was kept on the edge of my seat by the constant plot twists. I don't really want to say too much about what happens but trust me you'll never guess how things will turn out! The story is fast paced and I didn't want to put it down. As a side note I ended up listening to the audiobook and the narrator (Jesse Eisenberg) is absolutely brilliant and he really helps bring the characters to life. I have to admit I'm a bit of a sporadic audiobook listener, I usually get distracted and find I stopped listening 10 minutes ago and now have no idea what is happening in the story but that didn't happen here and I kept making excuses to listen for a just few more minutes.

If you haven't already started this series then I can't recommend it highly enough. I ordered copies of both Red Glove and Black Heart before I'd even finished with White Cat and I can't wait to finish the series.