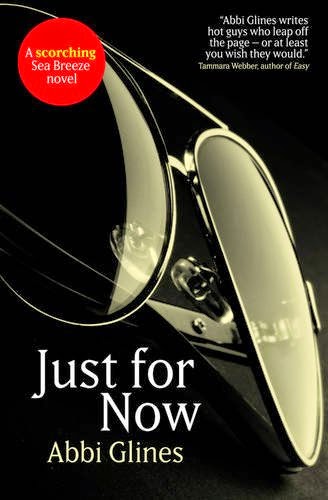 Preston Drake is one bad boy. He has a different girl in his bed every night, which is just how he likes it - no strings, no issues, just fun. The problem is, he keeps finding himself thinking about the one girl he shouldn't . . . his best friend's little sister, who's suddenly all grown up.

Amanda Hardy has had a crush on Preston forever, but his reputation always kept her away. Now that it seems the attraction might be mutual, it's getting harder to ignore her feelings . . .

No one wants them to be together - but their attraction is too strong to keep them apart.

Review:
I've really enjoyed the previous books in Abbi Glines' Sea Breeze series and I was looking forward to getting to know bad boy Preston a little better in Just for Now. We've seen quite a lot of him in the previous books but while he's a good friend to Marcus he's also always been a player and a ladies man and I wasn't sure how Amanda was going to get him to change his ways.

What we didn't know before was quite how much pressure is on Preston from his waste of space mother who she relies on Preston for everything. He pays her rent, buys her food and even puts petrol in her car for her and he does it all to protect his younger siblings Jimmy, Brent and Daisy. Preston is in college full time trying to get a decent education but he needs to earn money and he doesn't have enough free time to work a full time job as well. He's resorted to desperate measures but while the income means he can look after his family the work makes him feel dirty and cheap. He doesn't feel worthy of love and he's so ashamed of his situation that he doesn't feel that he can ask his friends for help or even tell them what is happening in his life. Because of that his friends just think of him as a party boy who doesn't have a care in the world when in reality that couldn't be further from the truth.

Amanda is Preston's best friend Marcus's little sister and completely off limits. Preston knows she is special but she is far too pure and innocent for the likes of him, besides Marcus would kill him if he ever found out about Preston's feelings. Amanda may be innocent but she knows what she wants and once she realises that Preston is attracted to her she deliberately sets out to get her man. Amanda sees Preston for who he really is and once she starts to get under his skin she realises how much he does to protect his siblings. I loved Amanda for the way she was so caring towards Jimmy, Brent and Daisy and I really enjoyed every scene with the younger kids in. They had such a tough upbringing but were really sweet kids and that was down to Preston and the way he had cared for them.

One thing that I found really noticeable in this story was the double standards and slut shaming though. All of the girls that Preston had been with were called names and considered whores by Amanda and the rest of Preston's friends but the fact that Preston slept with a different girl every night was completely fine. At one point Amanda actually thought "So he slept around. A lot of guys did. He was sowing his wild oats. It was okay to do that." about Preston but she'd earlier introduced one of her supposed friends to readers by thinking "Jess, Rock's cousin and the town slut". I'm not going to get into the whole issue of sleeping around and whether it's right or wrong but what I really HATE is that people seem to think it's OK for guys to do it but not for girls. Double standards irritate me and it did stop me enjoying this book quite as much as I would have done otherwise. If you want to get on your high horse about sleeping around you should call out the boys for their behaviour just as much as the girls! Or you can just take the opinion that they're all consenting adults and they have every right to do whatever the hell they want. Either way would be better than what happens here.

I did like Preston, he was in an impossible situation and he was doing the only thing he could think of to make sure his family survived. I'll admit I got a little irritated with him for not confiding in his friends sooner and asking for help but I could understand why he hadn't. In general I liked Amanda but her double standards kept making me want to shake some sense into her. I have really enjoyed the sea breeze series though so even though Just for Now wasn't my favourite instalment I'm still looking forward to reading more about this group of friends.