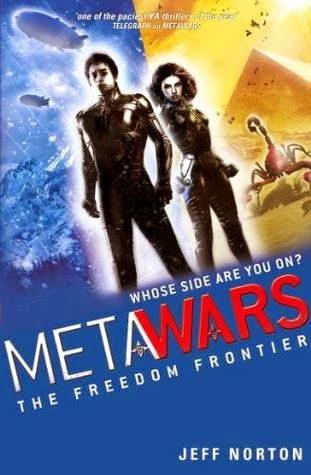 After the metasphere comes the final battle . . .

With the Guardians and Millennials eliminated, Jonah and Sam are left to fend for themselves. When they discover their enemy, Granger, is also on his own they take the ultimate leap of faith and join forces to survive . . . and save humanity. The future of the world on and off-line is at stake and Jonah will not stop until he prevails. Even if it means making the ultimate sacrifice.

The final book in the awesome METAWARS series.

Review:
You know all those mixed emotions you have when you reach the end of a much loved series? The nerves in case things don't turn out how you want them to, the sadness that this is your final adventure with those characters you've become so invested in and the worry that it won't live up to your expectations. I felt all those and more before I picked up The Final Frontier, I've had so much fun reading this series and I really didn't want to see it come to an end. Thankfully Jeff Norton manages to end the things on a high note and I think this really was my favourite book in the series.

Jonah has been through so much since the first book and he's grown into a young man that we can be proud of. He's been faced with difficult decisions, ones where there isn't always an easy solution, but no matter what he's always remained true to his beliefs and tried to do what's right. He has been lied to, manipulated and had people try to force him into things he's not comfortable with but he's also found out who is friends really are. He's lost people he loved and found people who are loyal to him that he would risk his life for in an instant. In short, he's grown up.

I don't want to say too much about the plot of The Freedom Frontier because I want readers to be able to dive in and experience it fully for themselves. Instead I'm just going to talk about the series as a whole and tell you just some of the reasons I've loved it so much. These books are full of action and adventure, the characters are faced with moral dilemmas, friends become enemies and enemies become friends. Nothing is what it first seems and just when you've changed your mind about a particular character something will come along and make you believe you were right about them in the first place. This is a world of different shades of grey, there is no black and white and both sides of the war have done questionable things. I think this quote sums that up perfectly:

"The Guardians wanted freedom. The Millennials wanted control. And both sides were willing to kill for their goals. He wondered how different they actually were. Whose side was he really on?"

Jonah is the one who has been stuck in the middle and he's handled that difficult position incredibly well. I have to mention Sam here too, she's been such a fantastic friend to Jonah and she has always had his back even when she isn't sure he's making the right choices. The two of them will take on any challenge and they always come out fighting for what they believe in.

The Metawars series is full of unexpected twists and turns, these books will grab you from the very first page and you won't want to stop until you've read them all. This final book is a game changer in the most wonderful ways, it took me on a rollercoaster of emotion and left me with a huge smile on my face. I don't think I can recommend this series highly enough and it's definitely put Jeff Norton on my list of must read authors.