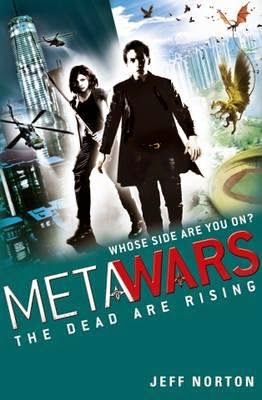 A change is happening in the Metasphere . . .

Thanks to Jonah Delacroix, the avatars of the Uploaded have been transferred to a dynamic new virtual world. But as the Uploaded grow in strength, so does their desperate desire to be alive again. And in a world at war both on and off-line, how can Jonah tell who is really on his side?

One thing is for certain: he must find out fast because . . . the dead are rising - and nothing can stop them.

The second book in the awesome METAWARS series.

Review:
The Dead are Rising is the second book in Jeff Norton's Metawars series and is just as action packed and addictive as the first. The story picks up not long after Fight for the Future ended, the Uploaded are now safely in the newly created Changsphere and the superior server power of the new system means that they are more "alive" than they ever were in the Metasphere. The Uploaded are regaining their memories and becoming much more self aware which would be a good thing if it didn't mean they were starting to realise that they're actually dead. With the Uploaded desperate to find a way into the real world it doesn't take long before they realise that by taking over the avatar of someone who is still alive they can exit the Changsphere and steal that person's body. With millions of Uploaded users looking for a quick exit the Changsphere is soon in real trouble and Jonah is right at the heart of it all. Can he find a way to stop the Uploaded without having them deleted? Will the Guardians be able to capture another corner of the Metasphere from Granger and the Millennials?

Everything I loved about the first book is back in The Dead are Rising and I was on the edge of my seat waiting to see how things would turn out. Poor Jonah is even more confused than ever about which side he should really be on and every time he thinks he has the answers he has the floor swept out from under him by a new revelation. I really don't know who the good guys are any more and I think that's actually the point that Jeff Norton is trying to make. He shows that the lines between good and evil aren't so black and white and that there is a whole lot of grey in between. The "good" guys do terrible things in pursuit of their goals and the "bad" guys aren't always completely evil. Jonah has a major moral dilemma on his hands and no matter how hard he tries he can't seem to find the right answer. I actually felt really sorry for him because I'm not convinced that any of the options currently available to him are the right choices. It's going to be really interesting to see how things play out as the series continues that's for sure!

Jonah has come a long way since we first met him, he has grown in confidence and he is more willing to stand up for what he believes in. It isn't easy for him to face off against his friends and allies but he does it and he even manages to make Sam start to question her upbringing rather than continue to blindly follow the Guardians. The Uploaded add a whole new dimension to the story, it was very easy to understand how much they wanted the chance to live again and to feel sorry for them and the situation they now found themselves in but that didn't make it any more acceptable for them to basically evict other people from their own bodies so they could return to reality.

This is the kind of series that really makes you think, it leaves you asking yourself questions about what you would be prepared to do for a few extra days with your loved ones but also makes you think about terrorism, dwindling natural resources and the future of our planet. I honestly have no idea how I want things to turn out - I'm definitely not a fan of Granger and the Millennials but I'm not sure that the Guardians can be trusted either so at the moment I'm on the fence about which side I think Jonah should take. I'm definitely looking forward to seeing how Jeff Norton continues the series though and will be starting Battle of the Immortal asap.