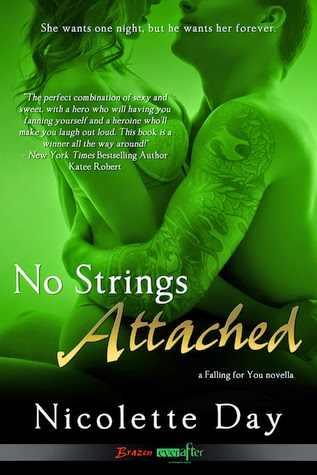 She wants one night. He wants her forever.

Hayden Summers just landed the job of a lifetime taking pictures for Time magazine, but she’s determined to leave with no regrets. The first thing on her list? Erase the memory of her cheating ex with a wild night of anonymous sex. The second? Figure out why her best friend, sexy bar owner Jace Jennings, stopped speaking to her the night she told him about the job.

Jace has a problem. Hayden isn't just leaving the country, she’s risking her life—just when he’s realized he’s in love with her. When fate traps them in the storage room of his bar together, barely contained desire simmers to surface. In one last attempt to keep her, Jace offers Hayden the one thing she wants: a night of hot sex, no strings attached. But when the night is over, will Jace be able to let her go? And will Hayden leave with her heart intact?

Falling for You Series:
No Strings Attached (Novella)
Tempted by the Soldier

Review:
At around 50 pages No Strings Attached is perfect for when you don't have enough time for a full length novel but still want to read a satisfying romance. I have to admit that I was worried that Nicolette Day wouldn't have enough time to do the story justice in such a short novella, especially as these are new characters that haven't been introduced to readers before but I ended up really enjoying getting to know Hayden and Jace.

I'm a sucker for friends to lovers romances and these two have a long history together which probably helped me get on board with a relationship that develops so quickly. Jace has been Hayden's best friend for a long time and she trusts him implicitly, what she doesn't understand is why he has been acting so distant ever since she told him she'd landed her dream job as a photographer for Time magazine. It took a long time for Jace to realise that he was in love with Hayden and now she's got a new job that is taking her out of the country and potentially putting her life at risk before he's even had a chance to tell her. He doesn't want to stop her from living her dream but he can't bear the thought of letting her leave without telling her how he feels. When he finds out that she plans to have a wild night with a stranger before she leaves the country he decides it's the perfect opportunity to show her how perfect they are for each other.

I don't want to say too much more so I'll just tell you that No Strings Attached may be short but it's also sweet and incredibly hot. It's a great intro to the Falling for You series and I can't wait to read Lilly and Nate's story Tempted by the Soldier.