Review: Paradise - Simone Elkeles (Bind Up including both Leaving Paradise & Return to Paradise) 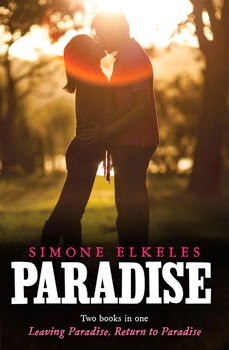 Nothing has been the same since Caleb Becker left a party drunk, got behind the wheel and hit Maggie Armstrong. After a year in juvenile jail, Caleb's free, but coming home doesn't feel as good as it should when his family and ex-girlfriend seem like strangers. Months of painful physical therapy have left Maggie with a limp. Longing to escape the pitying stares, the last person she wants to see is Caleb.

But despite the horror of their shared history, Caleb and Maggie can't seem to stay away from each other, with the heated attraction between them becoming undeniable. As they struggle with their growing feelings for each other, Caleb and Maggie realise that ultimately, whether they leave Paradise or stay, they must face the truth about the night of the accident, or the secret will forever stand between them.

Review:
Paradise is a bind up containing both Leaving Paradise and Return to Paradise by Simone Elkeles. I'd already read Leaving Paradise a few years ago (see my original review here) but for some reason I never got around to reading the sequel. It's been a long time since I read the first book though so I'm glad I decided to reread it before continuing the series, there was so much I'd forgotten about and I enjoyed it just as much the second time around.

Caleb was convicted of drink driving and leaving the scene of an accident and sentenced to time in a young offenders institute. All he wants is to go home and get his life back on track but it isn't going to be quite as easy as he was expecting. Maggie is the girl who was injured in the incident, she has spent the last year suffering through multiple operations and gruelling physical therapy but still walks with a limp and struggles every day with the pain she is in. She is dreading the thought of Caleb, her neighbour and long time crush, coming home and just wants to get the heck out of Paradise before he is released. When Caleb is released early he does his best to avoid Maggie but they seem to find themselves constantly thrown together by circumstances beyond their control. As their attraction grows can Maggie find a way to forgive Caleb for his actions and can Caleb finally learn to put the past behind him?

I was really nervous about reading a story where the hero was someone who had been convicted of drink driving. I guess having a father who was a fire fighter and used to come home and tell me in great detail about the car accidents he'd been called out to (this was a great way to ensure that his teenage daughter NEVER drove drunk!) has ingrained into my head just how stupid and dangerous drink driving is. Before I picked up the book I was pretty convinced that I would never be able to fall for Caleb but I know people make mistakes and having really enjoyed Simone Elkeles's other books I trusted her enough to give this series a try. I'm glad I did because she tackles a difficult subject and does it in a way that makes you think. She never glorifies drink driving and she manages to give all the facts and dangers without sounding preachy about it which I think is important if you want your readers to listen to the message you're trying to give them.

I'm going to be upfront and tell you that Caleb's attitude stinks at the start of the book, he has a very negative outlook on the world and acts as if he is the hard done by party rather than Maggie. He has a major chip on his shoulder and it took a little while for that to wear off and for a more vulnerable side to him to shine through. As it turns out he has good reasons for feeling the way he does but Maggie is still the one who I felt most connected to. She has been through so much and she hadn't done anything to deserve it. Her whole life was changed in an instant and she has struggled to cope since the accident happened. She has locked herself away from her friends and tries to avoid going out because she is embarrassed about her limp. I could understand why she acted that way but I can't tell you how satisfying it was to see her start to come out of her shell and rebuild her confidence and Caleb played a big part in that. Once Caleb started to spend time with Maggie and realise just how hard things had been for her he became a much more likeable character and I grew to respect him in the end for the way he owned up to his actions and paid the price.

I don't want to say too much about the plot, especially for the second book, because if you read the bind up like I did then it would be too easy for me to spoil the first story for you. I will say that I loved the interaction between Caleb, Maggie and their various family members. The accident didn't just effect the two of them it also had a knock on effect on everyone they know and that is something that is shown really well here. The consequences of one stupid mistake cause so much damage to so many people and that is something that is explored even more in the second book. There is a lot more to the accident than originally meets the eye and that secret threatens to destroy everything that Maggie and Caleb have built between them.

Leaving Paradise and Return to Paradise are the kind of books that will make you think. They are hard hitting at times but they also contain humour, love, friendship and so much more. There are some fantastic side characters who add a lot to the story and there are a few that I would love to see get their own books in the future. Simone Elkeles is one of my must buy authors for teenage contemporary romance and I'd be happy to recommend this series to anyone who reads that genre.