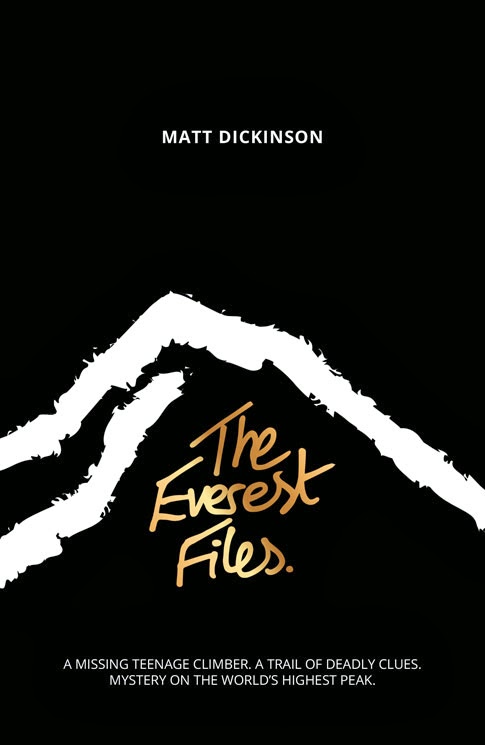 A THRILLING JOURNEY TO THE DARK SIDE OF EVEREST.

In the deepest Himalaya a story is spreading like wildfire. The story of an Everest expedition unlike any other. An expedition that ended with mysterious disappearances ... and death.

This is the mystery that eighteen-year-old Ryan Hart sets out to solve.

Ryan is on a gap year adventure, working for a medical charity in Nepal. When a local girl begs him to investigate why her sixteen-year-old friend Kami never came back from Everest, Ryan cannot resist the challenge.

A solo journey takes Ryan deep into the mountains where his detective work finally pays off. What emerges is a shocking tale of lies, betrayal and obsession.

All played out on the lethal slopes of the highest mountain in the world.

Little by little Ryan is falling under Everest’s deadly spell.

Review:
Ryan is in Nepal as part of his gap year, working for a medical charity and helping to deliver supplies to small Nepalese communities. When he is asked to investigate the disappearance of a young Sherpa boy Ryan finds himself unable to resist the mystery but what he uncovers is a web of lies and deceit like nothing he could ever have imagined.

Matt Dickinson is brilliant at writing adventure stories that will have you gripped from the first page. I loved Mortal Chaos so jumped at the chance of reading the first book in his new trilogy and The Everest Files is a fantastic start to that series. I have never had any ambitions of climbing Everest (I'm much more of an armchair adventurer!) but I loved going on this journey with Ryan and getting to know more about Shreeya and her missing friend Kami. You can tell that the author has personal experience of climbing Everest, he paints a vivid picture of Nepal and you'll feel like you're climbing the mountain alongside Kami.

Kami is so proud when he is chosen as one of the Sherpas to help carry equipment for the the expedition of a wealthy American politician. The money he makes from just one trip will be enough to allow him to start a life with his childhood sweetheart Shreeya but it means so much more to him than that. He always dreamed of one day reaching the summit of Everest and this is his chance to do that. He had absolutely no idea quite how dangerous the journey would be though. I don't know a great deal about climbing so I was a little nervous that I might get confused by the details of the different equipment used and how it all worked but I needn't have worried because the author manages to bring it to life in a way that is very easy to understand. I actually enjoyed learning more about the process of climbing a mountain but I was most interested in the emotional effects the journey had on Kami and the rest of the team and that was what really held my interest in the story.

I don't want to say too much more because I would hate to accidentally give a spoiler so I'll just say that I was very surprised by the direction things took. I was completely invested in Kami's story and along with Shreeya I was desperate to know what had happened to him. I'll confess that I wasn't so interested in what was happening to Ryan, particularly at the beginning of the book, but once he'd started investigating Kami's disappearance I was totally hooked. This is the first book in a trilogy so it will be interesting to see what happens to Ryan next, I believe that we have reached the end of Kami and Shreeya's journey but Ryan seems determined to have his own adventure and I'll definitely be picking up the next book to see where that takes him.

Source: Received from Vertebrate Publishing in exchange for an honest review