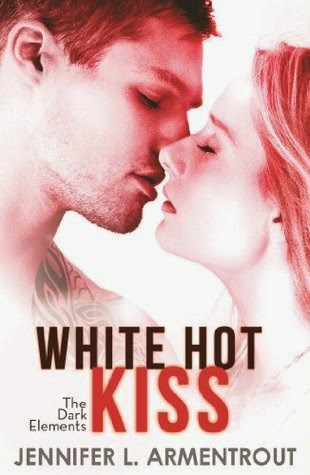 One kiss could be the last.

Seventeen-year-old Layla just wants to be normal. But with a kiss that kills anything with a soul, she's anything but normal. Half demon, half gargoyle, Layla has abilities no one else possesses.

Raised among the Wardens—a race of gargoyles tasked with hunting demons and keeping humanity safe—Layla tries to fit in, but that means hiding her own dark side from those she loves the most. Especially Zayne, the swoon-worthy, incredibly gorgeous and completely off-limits Warden she's crushed on since forever.

Then she meets Roth—a tattooed, sinfully hot demon who claims to know all her secrets. Layla knows she should stay away, but she's not sure she wants to—especially when that whole no-kissing thing isn't an issue, considering Roth has no soul.

But when Layla discovers she's the reason for the violent demon uprising, trusting Roth could not only ruin her chances with Zayne…it could brand her a traitor to her family. Worse yet, it could become a one-way ticket to the end of the world.

Review:
I really enjoyed Bitter Sweet Love (the prequel to the Dark Elements series), I liked both Jas and Dez but I think the character that intrigued me most was Layla, the young half demon / half warden (gargoyle) girl they met when they were in Washington, so I was excited when I found out that she was actually going to be the main character in the series. White Hot Kiss is set a few years on from the prequel and although Jas does appear occasionally throughout the story I have to admit I didn't like her as much in this book. She just seemed like a different girl to the one we met previously and considering she'd become friends with Layla in the first book I was irritated by her reactions in this one. I was also a bit disappointed that Dez doesn't even make a minor appearance.

However, the focus on this book is definitely on Layla and while there were some occasions when she started to irritate me overall I quite liked her. It isn't easy being the only half demon / half warden in existence. The wardens may have taken her in and they're very happy to use her ability to tag demons to help them in their fight against evil but the majority of the clan have never fully accepted her. Most of them don't trust her, in fact, they're pretty scared of some of her abilities so they always seem to put her down and belittle her. The only warden who has ever treated her like a normal girl is Zayne, he is a few years older than she is and has been protecting her ever since the wardens found her and brought her to live with them. As a part demon Layla doesn't just have the power to tag demons she also has the ability to suck the soul from anyone she gets close to, she has to constantly battle her instincts so that she doesn't harm anyone and Zayne is the one person who understands how hard she has to fight it. It's no real surprise that Layla developed a crush on Zayne but it is impossible for them to be together since wardens have such bright, pure souls and Layla couldn't even get close enough to kiss him without stealing his soul accidentally. I really loved the way Zayne stuck up for Layla in Bitter Sweet Love, he obviously cares about her a lot but in White Hot Kiss I actually found myself surprised and a little disappointed by his behaviour. Considering he is a potential love interest (and the guy whose team I expected to be on before I picked up the book) I was surprised to find myself much more interested in his demon rival Roth.

Roth is very much your typical bad boy, he has the looks, the snarky attitude and the sex appeal that I find very appealing in my fictional characters so it's no surprise I loved him from the moment he steps onto the page. He seemed much more vivid than most of the other characters in this series but even so doesn't really bring anything new to the table - he's exactly what I'd expect from one of Jennifer L. Armentrout's bad boys. Don't get me wrong, she writes very good bad boys, but I just was hoping for more from Roth. Either way I'm still firmly on team Roth when it comes to this love triangle and I do love his character.

I had expected to learn a lot more about the wardens in this book, I'm still not sure I understand why it is OK for the humans to know that gargoyles exist but so important that they don't find out that there are demons walking around. We were kind of given an explanation but it seems a bit flimsy to me and not a very logical one so I'm going to hope that we get more answers to that as the series continues. I think the wardens actually owe Layla a lot more information about her background and why they have kept so much hidden from her. Right now I find the demons more trustworthy than the supposed good guys which I wasn't expecting. There are some fantastic revelations towards the end of the story and the ending left me really eager to get my hands on a copy of the next book Stone Cold Touch. I have a feeling things are going to get very interesting now and I'm looking forward to seeing how certain events play out. I do hope that the triangle has less focus in the next book though. I'm really over that trope now and it's getting a little boring to see nearly every female main character bouncing back and forth between two hot male leads.

While I enjoyed White Hot Kiss and found reading it a pleasant way to pass the time I have to confess that it isn't my favourite one of Jennifer L. Arementrout's novels. I do think fans of YA paranormal romance will like it though, especially ones who are looking for something a little bit different - it's not every day you come across books about gargoyles after all.