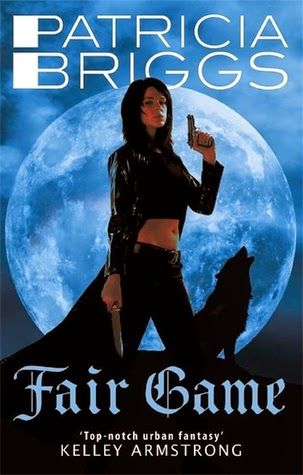 They say opposites attract. And in the case of werewolves Anna Latham and Charles Cornick, they mate. The son-and enforcer-of the leader of the North American werewolves, Charles is a dominant alpha. While Anna, an omega, has the rare ability to calm others of her kind.

Now that the werewolves have revealed themselves to humans, they can't afford any bad publicity. Infractions that could have been overlooked in the past must now be punished, and the strain of doing his father's dirty work is taking a toll on Charles.

Nevertheless, Charles and Anna are sent to Boston, when the FBI requests the pack's help on a local serial killer case. They quickly realize that not only the last two victims were werewolves-all of them were. Someone is targeting their kind. And now Anna and Charles have put themselves right in the killer's sights...

Review:
I have loved Charles and Anna since we first met them in Alpha & Omega and I've enjoyed seeing their relationship develop as the series has continued. They are still fairly new mates and have issues to work through on both sides but they've come a long way since they first met. Anna now trusts Charles implicitly, she knows without a doubt that he would never hurt her and she also trusts him to keep her safe around other wolves which is a big thing for her. In this instalment it is Charles who has issues that cause a bump in their relationship but I never once doubted that they would be able to work things out between them.

For centuries Charles has been his father's right hand man, he is the one that Bran sends out whenever there are problems and Charles is the one who has to issue any punishments to problem werewolves. Werewolf justice has always been swift and severe but now that the wolves have come out to the public it is more important than ever that they don't let the humans see the monsters they can become if they're out of control. This has meant that Charles has been spending more and more time as the Pack executioner and it's taking a toll on him physically and mentally. He hates what he has to do and he worries that it will make Anna think of him as a monster so he tries to hide things from her for her protection. Of course this has the opposite effect because Anna thinks he doesn't trust her enough to let her help him. While I could see where both sides were coming from I was totally behind Anna as she fought to get through to Charles and make him let her in.

I absolutely loved the way Anna went to bat for Charles and put Bran straight on a few things, as an Omega she is outside the Pack hierarchy so she is able to put Bran in his place like no other wolf can. She had an unlikely ally in the form of Asil and I have to admit I loved the scene where he points out a few home truths to Bran. I've loved Bran since we met him in the Mercy series but he definitely had a blind spot when it came to Charles and what being the Pack enforcer was doing to him emotionally. It takes Charles a while but he gradually comes to realise what is important to him and seeing him open up to Anna was fabulous. My favourite quote from the book is this one from when Charles has a major epiphany:

Honor, duty, and love. He would not sacrifice Anna for his father and all the other werewolves in existence. Given a choice, he chose love.

I'm deliberately not going to say too much about the plot of Fair Game in this review. Charles and Anna are sent to assist the FBI with an investigation into a serial killer and they quickly discover that the killer is targeting the supernatural community. There are some major developments towards the end of the book that are going to have a massive knock on effect in both the Alpha & Omega and Mercy Thompson series and I can't wait to see how things play out. This series just keeps getting better and better with every book and I think this is my new favourite instalment. I'm just gutted that I'm now up to date with both series and will have to wait until next year for the next book to be published. Patricia Briggs is without a doubt an auto buy author for me and I can't recommend her books highly enough!