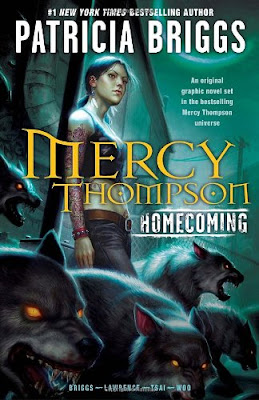 Mercy Thompson is a walker, a magical being with the power to transform into a coyote. She lives on the fine line dividing the everyday world from a darker dimension, observing the supernatural community while standing apart.

When Mercy travels to the Tri-Cities of Washington for a job interview, she quickly finds herself smack-dab in the middle of a gang war between rival packs of werewolves. And as if fangs and fur weren t bad enough, Mercy must deal with the scariest creature of all: her mother, who is convinced that Mercy is making a mess of her life and determined to set her daughter on the right course.

The thrilling adventures of Mercy Thompson Moon Called, Blood Bound, and Iron Kissed have topped the New York Times bestseller list. Now Mercy makes her comics debut in an exclusive new story created by Patricia Briggs. Mercy Thompson: Homecoming is sure to please longtime fans and capture new ones with its mix of unforgettable characters and thrilling supernatural intrigue."

Review:
I'm a huge fan of the Mercy Thompson world, its one of the few series that I read on pretty much an annual basis and I just started my 4th reread so I'll be ready for when the latest book, Silence Fallen, releases in March. I realised recently that even though I keep rereading the full length books and the short stories I'd never actually picked up the graphic novels so I thought it was about time I finally gave them a try.

Homecoming is actually a prequel story to the main books in the series which shows how Mercy came to live in the Tri-Cities area and ended up working as a mechanic for Zee. It also shows her first interactions with Zee, Tad, Stefan and Adam which are all things that fans of the series will probably be interested in seeing first hand. Although it's technically a prequel and can be read even if you're not familiar with the series I think you'll probably appreciate it more if you're familiar with the world and can recognise the characters as they appear.

The downside of being so familiar with this series is that I already had pretty set ideas in my head about what each of the characters would look like, these are characters who already feel real to me and I'll admit that the artist depictions didn't always match my own versions. Obviously no artist will be able to create versions that appeal to every fan of the series so I don't hold that against anyone and overall I did really enjoy the artwork. The major problem here is that the artist changed at some point during the process so characters like Mercy weren't drawn consistently throughout the book. I've included a picture showing four of the different faces Mercy was given just in the first few pages of the book, she would pretty much change from scene to scene (even within drawings from the same artist!) and I found that incredibly jarring. 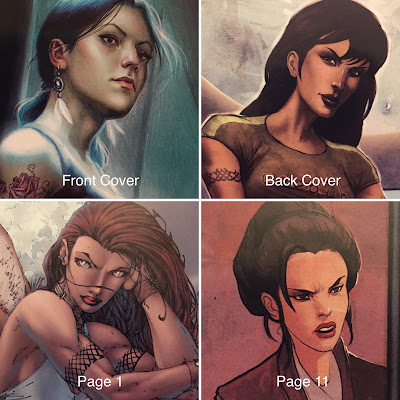 It wasn't just Mercy's face that changed, her body type did too - she'd be slim in one scene and voluptuous in the next and that lack of consistency bothered me far more than the fact that the characters weren't quite how I pictured them in my head. I'd been so excited when I saw the cover because that version of Mercy is pretty close to how I expected her to look but I don't think she actually appeared again anywhere inside the book.

Although I was disappointed I'm still glad I read this story, it was fun getting to see a bit more of Mercy's background and it made a nice change to see the characters in a different format. I'm just not sure I'd bother rereading this every time I revisit the series. I think if you're a huge fan of the series then it's still worth picking up a copy of Homecoming but if you decide to skip it you're not really missing out on anything vital.