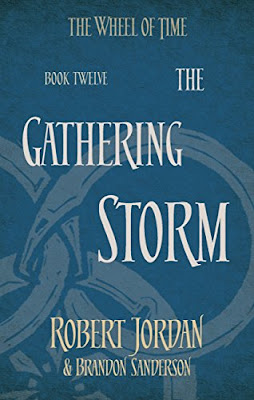 The Wheel of Time turns and Ages come and go, leaving memories that become legend. Legend fades to myth, and even myth is long forgotten when the Age that gave it birth returns again. In the Third Age, an Age of Prophecy, the World and Time themselves hang in the balance. What was, what will be, and what is, may yet fall under the Shadow.

Tarmon Gai'don, the Last Battle, looms. And mankind is not ready.

The final volume of the Wheel of Time, A Memory of Light, was partially written by Robert Jordan before his untimely passing in 2007. Brandon Sanderson, New York Times bestselling author of the Mistborn books, and now Stormlight Archive, among others, was chosen by Jordan's editor--his wife, Harriet McDougal--to complete the final volume, later expanded to three books.

In this epic novel, Robert Jordan's international bestselling series begins its dramatic conclusion. Rand al'Thor, the Dragon Reborn, struggles to unite a fractured network of kingdoms and alliances in preparation for the Last Battle. As he attempts to halt the Seanchan encroachment northward--wishing he could form at least a temporary truce with the invaders--his allies watch in terror the shadow that seems to be growing within the heart of the Dragon Reborn himself.

Egwene al'Vere, the Amyrlin Seat of the rebel Aes Sedai, is a captive of the White Tower and subject to the whims of their tyrannical leader. As days tick toward the Seanchan attack she knows is imminent, Egwene works to hold together the disparate factions of Aes Sedai while providing leadership in the face of increasing uncertainty and despair. Her fight will prove the mettle of the Aes Sedai, and her conflict will decide the future of the White Tower--and possibly the world itself.

Review:
Like a lot of fans of this series I was a little nervous going into The Gathering Storm because I wasn't sure if Brandon Sanderson would be able to capture the feel of the Wheel of Time series in quite the way Robert Jordan has created it. I'd never actually read a book by Brandon Sanderson before (although I'll certainly be buying some of them when I've finished this series!) so it wasn't a reflection on him as an author, just fears about a well loved series having a change in author. Of course I'm glad that Robert Jordan allowed someone else access to his notes so that the series wasn't left open ended but the nerves were definitely real when I picked up this book.

Luckily that worry turned out to be unneeded though because this ended up being one of my favourite books in the series. Yes there are differences in the writing style between the two authors but overall I think the changes Brandon Sanderson made to some of the characters (and certainly the increased pacing of the story!) were for the better. The things that have irritated me more and more in the most recent books were markedly absent here and I enjoyed the book so much more because of that. It takes us back to the good old days when there was always something interesting happening, no more boring filler chapters and three thousand side characters being added in every instalment that had pretty much no relevant role in the overall storyline.

The two characters who are really the main focus of The Gathering Storm are Rand and Egwene. Rand is on a difficult path and his storyline has been getting darker and darker as he tries to mold himself into someone who is capable of putting the greater good above the lives of individuals. It's completely against Rand's nature to allow people he considers under his protection, especially women, to get hurt in battle but he has come to the realisation that they won't be able to win at Tarmon Gai'don without casualties. It's quite sad to see Rand fighting against his instincts and also struggling with his madness in this book but his storyline is definitely interesting and I think he made a key realisation towards the end of the book that is going to make things a little easier for him going forwards.

Egwene really shines in this book, she really started to show her strength in the previous instalment and that just continues here. She has grown so much since she was raised as the Amyrlin Seat of the rebel Aes Sedai and her wisdom and cunning shine through in this book. There is no doubt in my mind that she is going to make a fantastic Amyrlin and I can't wait to watch her bring all the ajas back together again under the white tower where they all belong. It's going to be an exciting time for the Aes Sedai and I'm particularly interested to see how they deal with the Seanchan after the betrayal in this book.

It's obvious that various plot threads are being woven closer together now that the end of the series is approaching. I can't actually believe there are only two books left but I am more excited about this series than ever and I can't wait to see how each of the character's stories end.