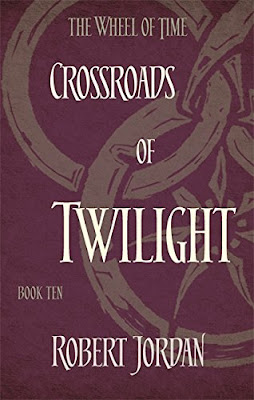 Fleeing from Ebou Dar with the kidnapped Daughter of the Nine Moons, Mat Cauthon learns that he can neither keep her nor let her go, for both the Shadow and the might of the Seanchan empire are now in deadly pursuit.

At Tar Valon, Egwene al'Vere lays siege to the White Tower. She must win quickly, with as little bloodshed as possible, for unless the Aes Sedai are reunited only the male Asha'man will remain to defend the world against the Dark One.

Meanwhile, Rand al'Thor must gamble again, with himself at stake - not knowing which of his allies are really enemies.

Review:
Crossroads of Twilight is notoriously the lowest rated book in the Wheel of Time series but I have to say I still like it a million times more than A Crown of Swords so it was actually much better than I expected it to be. I can understand why it's not the most popular book because there really isn't much progress made on the plot and there are no exciting battles or events like usual.

This book is over 800 pages long and yet it feels like pretty much nothing happened so I see why people are starting to feel frustrated, especially if they're like me and actually having problem keeping track of who half the side characters are now that there are so many of them. In particular I find all the different groups of Aes Sedai (with unhelpfully similar names) have started blending into one in my mind and I'm kind of sick of the way they're constantly plotting behind each other's backs and never willing to let anyone else in on their plans.

I'm finding Elayne's story boring, Egwene doesn't seem to be achieving much, Rand is pretty absent in this book and Aviendha, Min and Nynaeve don't really add anything important to the story either. I'm interested in what's happening with Perrin and Faile but at the same time I'm also seriously unhappy about the rumours Berelain is deliberately trying to spread and I'm worried that it's going to cause unnecessary relationship drama when Perrin and Faile are finally reunited, especially since Faile has found her own new admirer. It was also great to see Loial make a reappearance but his scenes were too short so I'm hoping for more of him in the next book. Mat's scenes were the ones that stole the show though, I'm still fairly undecided on the Daughter of the Nine Moons but it sure is interesting to see Mat's reaction to her. I'd just like to see her treat him a bit less like an irritating servant.

Overall this is very much a book that is moving everyone around the board like chess pieces, there aren't any major events but you can tell that Robert Jordan is starting to get his characters lined up where he needs them so they'll be ready come the final battle. New alliances are forming while old ones crumble away and hopefully a lot of things will make more sense when we're looking back with hindsight after reading another book or two. I'm still very much invested in the series and looking forward to seeing how it all ties together in the end.