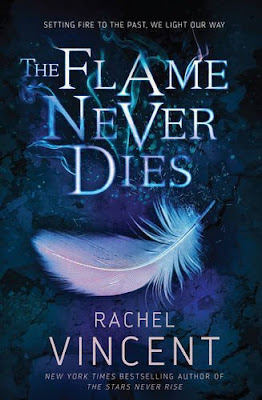 One Spark Will Rise

Nina Kane was born to be an exorcist. And since uncovering the horrifying truth―that the war against demons is far from over―seventeen-year-old Nina and her pregnant sister, Mellie, have been on the run, incinerating the remains of the demon horde as they go.

In the badlands, Nina, Mellie, and Finn, the fugitive and rogue exorcist who saved her life, find allies in a group of freedom fighters. They also face a new threat: Pandemonia, a city full of demons. But this fresh new hell is the least of Nina’s worries. The well of souls ran dry more than a century ago, drained by the demons secretly living among humans, and without a donor soul, Mellie’s child will die within hours of its birth.

Nina isn’t about to let that happen . . . even if it means she has to make the ultimate sacrifice.

Review:
It's been several months since Nina escaped from the Church demons with her pregnant sister Mellie and the other exorcist friends they made. They've spent that time roaming the badlands, killing any degenerates they come into contact with but also trying to gather enough supplies for themselves and Mellie's baby. Mellie is due to drop any day now and they only thing they can't guarantee is a soul for the baby since they are now so limited but Nina has a plan in place and she's willing to pay any price for her niece or nephew to survive.

I'm quite sad that this series is only a duology but The Flame Never Dies is a fitting conclusion to Nina and Mellie's journey and I thoroughly enjoyed reading this series. I'm not going to go into detail about what happens in this story but if you enjoyed The Stars Never Rise you'll definitely want to pick up the sequel.

Nina has really come into her own in this instalment, she's much more confident in herself and she has everything to fight for so she's determined not to see any harm come to what is left of her family. She doesn't always make the right choices but she is willing to make hard decisions and she'll sacrifice anything to protect the people she loves. You'll see our group of friends make new allies, discover even more terrifying enemies and fight as hard as they can to survive.

I'm not going to lie, there will be moments that break your heart but overall I thought the series ended on a hopeful tone. Things haven't all been tied up in a nice little bow with a happily ever after guaranteed but that would be unrealistic for this world, what you will see is that all isn't lost and there is hope that humanity can defeat their enemies if they're willing to keep fighting.

This has been a fun series from Rachel Vincent, I don't think I love it quite as much as the Soul Screamers series but we had a lot more time to get invested in those characters over seven books so that's not too surprising. I'm still very happy to recommend the Well of Souls series and I'm kind of hoping that the author will choose to revisit these characters again in the future but I'm happy with the way things ended even if she doesn't.