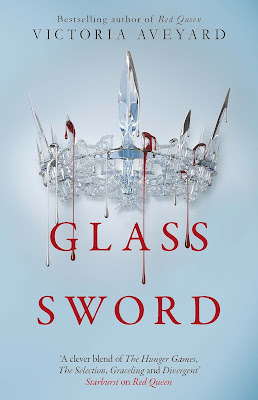 If there's one thing Mare Barrow knows, it's that she's different.

Mare's blood is red - the colour of common folk - but her Silver ability, the power to control lightning, has turned her into a weapon that the royal court tries to control.

The crown calls her an impossibility, a fake, but as she makes her escape from the prince and friend who betrayed her, Mare uncovers something startling: she is not the only one of her kind.

Pursued by the Silver king, Mare sets out to find and recruit other Red and Silver fighters to join in the struggle against her oppressors.

But Mare finds herself on a deadly path, at risk of becoming exactly the kind of monster she is trying to defeat. Will she shatter under the weight of the lives that are the cost of rebellion? Or have treachery and betrayal hardened her forever?

Review:
Glass Sword picks up Mare's story just after the ending of Red Queen. She was rescued by the Scarlet Guard along with Cal after they were both betrayed by Maven and now they've got to try and make some sense out of everything that has happened. Maven has the world convinced that Cal killed the old king and he's now claimed the throne for himself, completely stealing Cal's birthright. Mare and Cal are going to have to learn to trust each other if they want to stand a chance against Maven but he's not an enemy who will be easy to beat no matter how many people they have on their side.

It's not helping that the Scarlet Guard don't trust them either, the Colonel isn't willing to listen to their ideas and it looks like he's taking his army in a very dangerous direction. Mare knows they need to focus on finding the other New Bloods (people like her with red blood but silver abilities) and recruiting them to their side before Maven can have them all murdered but the Colonel isn't listening so she may have to take matters into her own hands.

Glass Sword was another brilliant instalment to this series, once again it's a book with really mixed reviews from a lot of my friends but I went into it feeling hopeful and am happy to say I loved it. I really enjoyed getting to meet so many different New Blood characters, they have such a range of different abilities and this book was a bit like a fantasy version of the X-Men. I love that Mare isn't perfect, she makes mistakes like any young girl in her situation would but she always tries to do the right thing and when she messes up she's smart enough to own it and do her best to make things right. I think she's a pretty great character but I also love so many of the side characters like Cal, Kilorn, Shade and Farley, they're all such well built characters with their own motivations and goals and it's nice to have so many well rounded characters to root for.

There were a couple of shocking events towards the end of the book, one that broke my heart and one that left me in a panic, so I'm desperate to get my hands on a copy of King's Cage to find out what happens next. This series is going from strength to strength and I can't wait to see where Victoria Aveyard takes us next.