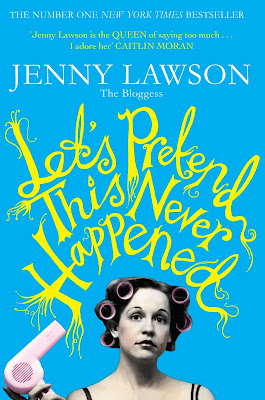 Have you ever embarrassed yourself so badly you thought you'd never get over it?

Have you ever wished your family could be just like everyone else's?

Have you ever been followed to school by your father's herd of turkeys, mistaken a marriage proposal for an attempted murder or got your arm stuck inside a cow? OK, maybe that's just Jenny Lawson . . .

The bestselling memoir from one of America's most outlandishly hilarious writers.

Review:
As a fan of Jenny Lawson's blog (The Bloggess) I have no idea why it has taken me so long to read her first book and I'm kicking myself because Let's Pretend This Never Happened is without a doubt one of the funniest books I've ever read.

This is a mostly true memoir that starts with stories from Jenny's rather crazy childhood thanks to her taxidermist father who had a habit of bringing home random animals as pets (everything from raccoons to armadillos with the occasional porcupine thrown in) or equally random roadkill to be used in his work (the squirrel puppet story was enough to give me nightmares!). I think she inherited her ability to get into the most completely crazy situations from her father (like the time she got her arm stuck in a cow's vagina or the turkeys that used to follow her to school) because surely these things don't happen to most people?

The story continues through Jenny's marriage to Victor and the birth of their daughter Hailey and shares some of their funniest family memories. Victor must have the patience of a saint to deal with everything that gets thrown at him but at the same time I think he's actually quite lucky to have a wife like Jenny. I mean life would never be boring with her around and you only have to read some of their conversations to see that he's just as crazy as she is but in a slightly different way.

Although this book is full of hilarious stories (like the way Jenny's dad threw a bobcat at Victor the first time they met or Jenny's fairly recent addiction to buying taxidermied animals in cute costumes) it also touches on some really difficult subjects like miscarriage, anorexia, depression and anxiety. I think it's those stories that make it even easier to relate to Jenny and I admire the way she has pulled herself through so many difficult times and is still able to see the funny side of life.

This book made me laugh so hard I cried and even flicking through it again now as I'm writing my review I'm having to stop and reread sections all over again because they're still hilarious. I had ordered Jenny's second book, Furiously Happy, before I'd even finished reading the second chapter of this one and that's probably the biggest indication I can give you of how much I loved it. I'd recommend this book to absolutely anyone as long as you're not easily offended, this book is full of colourful language and madcap tales but you'd be hard pressed to find a more amusing memoir.