Review: The Wrath and the Dawn - Renee Ahdieh 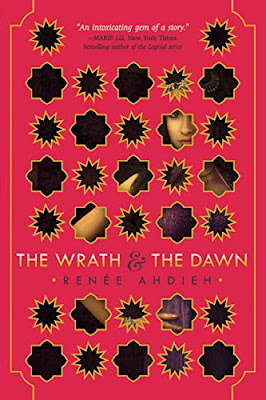 One Life to One Dawn.

In a land ruled by a murderous boy-king, each dawn brings heartache to a new family. Khalid, the eighteen-year-old Caliph of Khorasan, is a monster. Each night he takes a new bride only to have a silk cord wrapped around her throat come morning. When sixteen-year-old Shahrzad's dearest friend falls victim to Khalid, Shahrzad vows vengeance and volunteers to be his next bride. Shahrzad is determined not only to stay alive, but to end the caliph's reign of terror once and for all.

Night after night, Shahrzad beguiles Khalid, weaving stories that enchant, ensuring her survival, though she knows each dawn could be her last. But something she never expected begins to happen: Khalid is nothing like what she'd imagined him to be. This monster is a boy with a tormented heart. Incredibly, Shahrzad finds herself falling in love. How is this possible? It's an unforgivable betrayal. Still, Shahrzad has come to understand all is not as it seems in this palace of marble and stone. She resolves to uncover whatever secrets lurk and, despite her love, be ready to take Khalid's life as retribution for the many lives he's stolen. Can their love survive this world of stories and secrets?

Inspired by A Thousand and One Nights, The Wrath and the Dawn is a sumptuous and enthralling read from beginning to end.

Review:
I have to admit I was a little nervous when I picked this book up, it has a lot of mixed ratings amongst my friends so I knew it was going to be one of those books that I'd either love or hate but the cover made me buy it anyway and now, having read it, I have absolutely no regrets. Right from the very first page I was drawn into the world that Renee Ahdieh has created and her writing is absolutely beautiful. She paints such a vivid picture of Khorasan that it's almost more like watching a movie than reading a book and I was enjoying the story so much that I'd ordered the sequel before I even hit the halfway point.

I loved Shahrzad's character in the beginning, the way she was so bravely determined to be chosen as the Caliph's next bride so that she could turn the tables on him and kill him before he could kill her and the fact that she obviously has the skills to back up her quest. I'll admit things go a little wobbly for her when she arrives at the palace and can't quite bring herself to carry out the deed but you know what? I was so sucked into the story that it really didn't bother me all that much, especially when you start to see that there's much more to Khalid's side of the story than you first suspect. I'm not a fan of insta-love but the way their relationship developed didn't feel too rushed for me, the attraction was there from the beginning but I didn't think feelings started getting involved until they'd started getting to know each other a little better.

Add in the fact that I really enjoyed getting to know the side characters and I just found this an incredibly enjoyable story that I ended up devouring really quickly. It's taken me a long time to get around to typing up my review (it's a good job I take notes because I'm ridiculously behind again at the moment) but now that I finally have I'm excited that I'll be able to pick up the short stories and finally read the sequel. The Wrath and the Dawn had a pretty killer cliffhanger so I'm desperate to see what happens next!