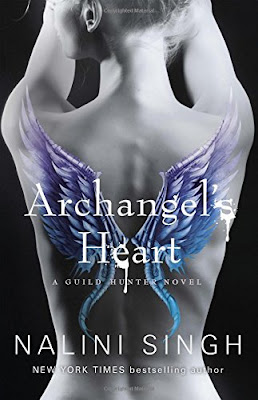 New York Times bestselling author Nalini Singh takes us into a dangerous and exhilarating world where a deadly, beautiful archangel and his once-mortal consort are caught in a fury of twisted darkness . . .

One of the most vicious archangels in the world has disappeared. No one knows if Lijuan is dead or has chosen to Sleep the long sleep of an immortal. But with her lands falling into chaos under a rising tide of vampiric bloodlust, a mysterious and ancient order of angels known as the Luminata calls the entire Cadre together to discuss the fate of her territory.

Accompanying her archangel lover Raphael to the Luminata compound, Guild Hunter-turned-angel Elena senses that all is not as it seems. Secrets echo from within the stone walls of the compound, and the deeper Elena goes, the uglier the darkness. But neither Raphael nor Elena is ready for the brutal truths hidden within - truths that will change everything Elena thinks she knows about who she is . . .

Review:
Everytime I think this series can't possibly get any better Nalini Singh proves me wrong. I've loved getting to know some of the Seven better in the last couple of books but I'm always happy to get the chance to revisit Elena and Raphael. Their relationship is one of my favourites and I love seeing how far they've come together. They still have their struggles but their love has a rock solid foundation and they are 100% committed to each other.

Archangel's Heart is a little slower paced after the last couple of books, there are no major battles between the archangels but that doesn't mean nothing is happening. It's been two years since the end of Archangel's Enigma and everything has fallen quiet, the cascade has halted progress and Lijuan hasn't been seen since her last big fight with Raphael and Alexander. As much as she's trying to enjoy the calm before the storm Elena is just waiting for the other shoe to drop and she doesn't have to wait long when Raphael and the rest of the Cadre are called to a meeting by the Luminata.

You might be shocked to discover that there is a group out there that would dare to call upon the Cadre but that is precisely what the Luminata was created for. They're basically the equivalent of an immortal monastery full of angels who have chosen to leave the world behind so they can follow the path to luminescence. The Luminata live in an isolated compound where they are the keepers of important angelic art and historical documents and they were also given the right to call the Cadre to a meeting if any archangel ever disappeared from the public eye. Since Lijuan has been missing for two years and there are increasing reports of bloodlust from the vampires in her region the Luminata have called the Cadre together to discuss the matter.

Travelling to the heart of Morocco with Raphael and Aodhan, Elena is hoping she might be able to discover more about her mother's family and where she came from but when they arrive in Lumia it quickly becomes clear that not everything is what it should be in a place built for peaceful contemplation. There is an undercurrent of fear in the local village and Elena is determined to get to the bottom of things but what she finds will shock her to the core.

I think it's fair to say I loved this book, it's always fun to see the Cadre in action and I really appreciate that the archangels are all such complex beings so even that the ones who I wouldn't consider Raphael's allies aren't always completely evil. The relationship between Elena and Raphael is fantastic but I also really enjoy the friendships she is making with other immortals like Hannah, Elijah, Titus and the members of Raphael's Seven. There are some fantastic moments between Aodhan and Illium, I'm shipping those two harder than ever before but I have complete faith in Nalini and as long as they both get a HEA I will be happy with whoever she matches them up with (that's probably a little bit of a lie because I'm going to be devastated if they don't hook up but I do trust Nalini to do what's best for her characters in the long run!). One of the things I loved most about this one was getting to learn more about Elena's family history and I can't wait to see how certain revelations play out as the series continues.

The Guild Hunter series is one of my favourites, the world building is phenomenal, the characters are amazing and Nalini Singh is still keeping the plot fresh and exciting nine books in which is a skill not all authors are able to pull off. I don't want this series to ever end and I'm already desperate to get my hands on the next instalment!