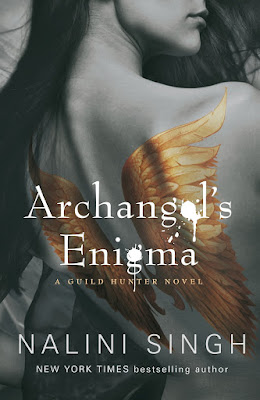 Naasir is the most feral of the powerful group of vampires and angels known as the Seven, his loyalty pledged to the Archangel Raphael. When rumours surface of a plot to murder the former Archangel of Persia, now lost in the Sleep of the Ancients, Naasir is despatched to find him. For only he possesses the tracking skills required, those ore common to predatory animals than to man.

Enlisted to accompany Naasir, Andromeda, a young angelic scholar with dangerous secrets, is fascinated by his nature - playful and brilliant, sensual and brutal. As they race to find the Sleeping archangel before it's too late, Naasir will force her to question all she knows . . . and tempt her to walk into the magnificent, feral darkness of his world. But first they must survive an enemy vicious enough to shatter the greatest taboo of the angelic race and plunge the world into a screaming nightmare . . .

Review:
I don't know how Nalini Singh does it but this series just continues to get better and better with every single book. Out of all of Raphael's Seven Naasir had mostly stayed off my radar until we started to get to know him a little better in Archangel's Shadows but those glimpses had me dying to know more and I incredibly excited to discover that he was going to be the main character in Archangel's Enigma.

Along with Elena I was desperate to unravel the mystery of his background and learn more about one of the most mysterious characters in the series. I'm not going to spoil the reveal for anyone but trust me it was well worth the wait and it completely surprised me, I don't think I could have guessed his origins in a million years! Naasir is such a brilliant character, he's almost childlike in some ways because of the black and white way he looks at the world - he doesn't play games and is very much a what you see is what you get kind of guy - but he's definitely all man where it counts and I loved the contradictions in him. He doesn't always find it easy to relate to people but he's very playful, completely and utterly charming with a hint of danger that is always lurking underneath. I am absolutely fascinated by him and could happily have read a book that was twice as long just to spend more time unravelling his secrets!

It takes a special kind of woman to tame a man as wild as Naasir but Andi is up to the task. She may be a scholar by choice but I loved that along with being smart as hell she's also a trained warrior who is more than capable of defending herself. Naasir needs a woman who is tough enough to fight by his side and Andi was just as protective of him as he was of her. I loved how slow build their romance is, they are drawn to each other from the beginning but thanks to a vow Andi has made they end up taking things incredibly slowly and I savoured every minute of it. I'll admit I wasn't too sure about the vow when I first heard about it (and Naasir certainly wasn't impressed!) but I ended up really respecting both of them for the way they handled everything. My one irritation with Andi was the big secret she was keeping, I desperately wanted her to open up to Naasir sooner even though I understood why she didn't want to and was able to forgive her for it.

Although the romance was sweet and great fun to read about there were so many other things going on in this book that I was on the edge of my seat practically the whole way through. Lijuan has gone so far off the rails that it is pretty much impossible to guess what lengths she'll go to next and her plans to murder a sleeping Ancient are despicable. I can't wait to see her suffer for her actions but I have no idea how anyone is going to take her out considering how powerful she has become! Talking of the Ancient I have to mention how excited I am about the direction things went in here, the Cascade is definitely causing some very interesting developments and I think we're going to be in for one heck of a ride throughout the next few books. Of course we also see more of our favourite characters, Elena and Raphael have some lovely scenes, we get more about Naasir and Dmitri's relationship and there are some wonderful, wonderful moments between Illium and Aodhan. I can't quite decide who I think will be the focus of the next book, there are definitely several possibilities, but I am dreading the wait for it to be published and it'll definitely jump to the top of my to read pile the minute I get my hands on a copy - just like anything else that Nalini Singh writes. She really is an amazing author that nobody else can quite compare to.