Review: Even White Trash Zombies Get the Blues - Diana Rowland 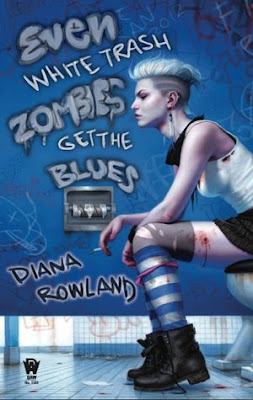 Angel Crawford is finally starting to get used to life as a brain-eating zombie, but her problems are far from over. Her felony record is coming back to haunt her, more zombie hunters are popping up, and she's beginning to wonder if her hunky cop-boyfriend is involved with the zombie mafia. Yeah, that's right-the zombie mafia.

Throw in a secret lab and a lot of conspiracy, and Angel's going to need all of her brainpower-and maybe a brain smoothie as well-in order to get through it without falling apart.

Review:
I absolutely loved the first book in this series - in fact, I enjoyed it a lot more than I expected to considering I don't tend to read zombie novels and I'm very squeamish! - so I had incredibly high hopes for Even White Trash Zombies Get the Blues. I fully expected this book to be just as awesome but unfortunately it ended up falling a little flat which was really disappointing.

One of the best things about My Life As A White Trash Zombie was the humour but somehow much of that seemed missing in the sequel. It's really hard to put my finger on exactly why I stopped finding Angel amusing but I think it was possibly the fact that she had completely turned her life around so quickly. I loved that she was working so hard to improve her life but it seemed like she had managed to get herself sorted out far too quickly and put her roots more or less completely behind her in a lot of ways. I also missed the blood, guts and brains from the first book (something I NEVER expected to find myself saying!), yes Angel still has to eat brains to survive but it was much more mundane here as she mixed it in with normal everyday food before eating it.

I think I was most disappointed by the direction things took between her and Marcus though. At the end of the previous couple they had just started to get to know each other properly and were beginning to date but here their relationship seemed to have jumped forward at the speed of light and they were practically living together. I could have dealt with that if it hadn't been for the way Marcus was so completely and utterly dismissive of Angel whenever she tried to ask his advice or tell him her suspicions about what was going on. It seemed completely out of character for him to act like that, especially considering the way he treated her in the first book. I'm not a fan of characters who keep secrets for no apparent reason and it puts other people in danger because they don't have all the information they need to stay safe and there was more than one occasion when I really wanted to reach into the book and slap some sense into Marcus.

The beginning of the book was a little on the slow side but things really picked up pace in the second half and in spite of the issues I had with Marcus I did find myself starting to enjoy the story much more. I may have been a little disappointed with this instalment but I loved the first book enough to give the series another chance. I just hope Diana Rowland manages to bring the magic back in White Trash Zombie Apocalypse.