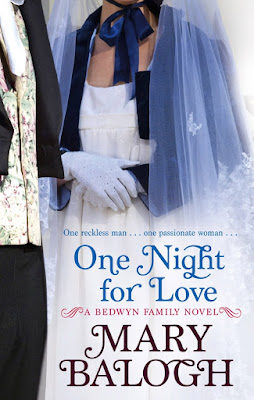 Neville Wyatt, Earl of Kilbourne, awaits his new bride at the altar - when a ragged beggar woman races down the aisle instead. The cream of the ton see him stare, shocked, then declare that this is his late wife! One night of passion is all he remembers of Lily, the woman he'd wed, loved, and lost on the battlefield in Portugal. Now he must endeavour to honour his commitment to her - regardless of the gulf that lies between them.

Lily wants only to start a new life - with a husband who truly loves her. She leaves Wyatt to learn how to meet his world on her terms and upon her return Lily soon becomes the toast of the ton, every inch a countess fit for the earl. Wyatt vows to prove to his remarkable wife that what he feels for her is more than desire, that what he wants from her is much more than simply one night for love . . .

Review:
Neville Wyatt, future Earl of Killbourne, was going through a rebellious stage when he joined the army and went off to fight in the Napoleonic war. The last thing he expected was to fall madly in love with the daughter of a common soldier and he knows deep down that there couldn't ever be a future for them. However, when her father is shot in battle he makes a promise to the dying man to protect Lily and it gives him the perfect excuse to marry her. Unfortunately when they are ambushed the following day Neville witnesses Lily being shot and believes her dead but before he can check on her he is badly injured himself. Two years later Neville is trying to put his life back together and has agreed to marry his cousin to keep his family happy. He is standing at the alter waiting for his bride when a bedraggled Lily stumbles in and halts the wedding.

Neville couldn't be more thrilled to discover that his wife is alive but Lily has been through hell since their wedding, captured and held prisoner she suffered all kinds of degradation and is sure that Neville will reject her. Neville is horrified by what she has been through and feels that he let his wife down but nothing will ever convince him that they aren't meant to be together. Lily may love him with all her heart but she wasn't expecting the splendour of his estate and she struggles to fit in with his family and friends. Lily doesn't feel good enough for him and decides to leave him for his own good and make a fresh start for herself in London. But nothing is quite what it seems and Neville isn't going to let Lily go without a fight so he becomes determined to win her back.

One Night for Love is an incredibly sweet love story, and I enjoyed every minute of it. Lily has been through so much and it was only the thought of being reunited with Neville that kept her sane so she is heartbroken when she finds he was about to marry someone else and she has no idea how she fits into his life back in England. She feels out of place, uncomfortable and convinced that Neville would be better off without her but that doesn't stop her trying to fit in. I think what I loved most about her was her courage, she is terrified of Neville's reaction when he finds out what happened to her but she is brave enough to immediately tell him what happened, then she is brave enough to do what she thinks is best and move to London without him. The romance between her and Neville is really well developed and it was easy to see why they were so good together.

Neville was a great hero, he was honourable, protective and very loving. I loved his reaction to what had happened to Lily, he never once blamed her or made her feel less than worthy of his love and he was incredibly kind and patient with her. He wanted her to be comfortable enough to be herself and refused to let his family intimidate her or try and turn her into something she wasn't, in fact I think he loved her all the more because she was so unconventional. They just fit each other perfectly and I enjoyed seeing them spend time together.

This was my first book by Mary Balogh, in fact it was my first historical romance for a couple of years, but it definitely won't be that long before I read another. I'm excited to continue reading this series and looking forward to spending time with some of the side characters we've already been introduced to.