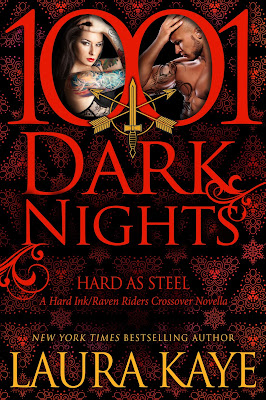 After identifying her employer's dangerous enemies, Jessica Jakes takes refuge at the compound of the Raven Riders Motorcycle Club. Fellow Hard Ink tattooist and Raven leader Ike Young promises to keep Jess safe for as long as it takes, which would be perfect if his close, personal, round-the-clock protection didn't make it so hard to hide just how much she wants him—and always has.

Ike Young loved and lost a woman in trouble once before. The last thing he needs is alone time with the sexiest and feistiest woman he's ever known, one he's purposely kept at a distance for years. Now, Ike's not sure he can keep his hands or his heart to himself—or that he even wants to anymore. And that means he has to do whatever it takes to hold on to Jess forever.

Review:
I'm a huge fan of Laura Kaye's Hard Ink series so when I found out she was writing a spin off about the Raven Riders MC I was thrilled. Hard as Steel is a crossover novel that bridges the two series and gives us the chance to meet some more of the Raven Riders characters. We've already met both of the main characters, Jess and Ike, in the Hard Ink novels and timeline of this novella is during Hard to Let Go so will contain spoilers for that book if you haven't already read it.

Ike and Jess both work alongside Jeremy and Nick as tattoo artists at Hard Ink but they are drawn into the fight to clear Nick's Special Forces team of wrongdoing when Jess is targeted by their enemy. When it becomes clear that Jess is in danger Ike, who is also a member of the Raven Riders MC, immediately steps up to offer her his protection. They have been friends for a long time and he will do whatever it takes to keep her safe.

Jess has been attracted to Ike since they first met but there has always been a very clear line drawn between them so they have never given into temptation but now that she finds herself in close quarters with him for a prolonged period of time she is finding him harder to resist than ever before. Ike has never wanted a relationship, he let down the first woman he loved and has never been able to forgive himself so doesn't feel that he deserves a second chance at happiness. Jess tempts him more than any other woman has though and it isn't long before the heat between them blazes out of control.

I enjoyed seeing this couple get their happily ever after, they have both been through some traumatic times and it was nice to see them talk things through and come out the other side. There was a moment when Ike was a complete idiot and really annoyed me with the way he spoke to Jess but he's man enough to apologise so I was able to forgive him. The chemistry between them was great but I did feel that in the circumstances things happened a bit sooner than I would have expected them to. Hard as Steel is a novella so there is less time for relationship development but it was an enjoyable story and has left me looking forward to spending more time with the Raven Riders when Ride Hard releases next year.