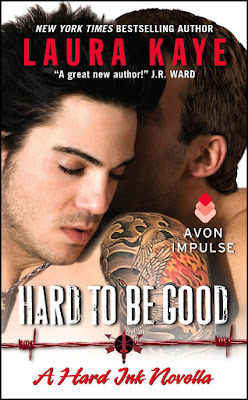 Two damaged men.
One dangerous mission.
One healing love.
These are the men of Hard Ink.

Hard Ink Tattoo owner Jeremy Rixey has taken on his brother's stateside fight against the enemies that nearly killed Nick and his Special Forces team a year ago. Now Jeremy's whole world has been turned upside down by the chaos - and by a brilliant, quiet blond man who tempts him to settle down for the first time ever.

Recent kidnapping victim Charlie Merritt has always been better with computers than with people so when he's drawn into the SF team's investigation of his army colonel father's corruption, he's surprised to find acceptance ad friendship - especially since his father never accepted who he was. Even more surprising is the heated tension he feels with sexy, tattooed Jeremy, Charlie's opposite in almost every way.

With tragedy and chaos all around them, temptation flashes hot, and Jeremy and Charlie can't help but wonder why they're trying so hard to be good . . .

Review:
I have been looking forward to reading this book every since Laura Kaye announced that Jeremy would be getting his story told, he's been a favourite character since the beginning of the series and when I found out he was being paired up with Charlie I was really excited to see that it was going to be a MM pairing.

Jeremy has been such a fantastic character since the beginning, he's Nick's brother, the owner of the Hard Ink Tattoo shop and he opened his home to Nick's whole team without question. Since then his life has been torn upside down but he's never said a word of complaint, in fact he's always there lightening the mood with his silly slogan t-shirts and light hearted banter. Even after the explosion that destroyed half of his building he doesn't feel resentment towards the others, he just feels guilty that he wasn't able to do more to help protect the place and blames himself for the deaths of the people who were with him when the roof collapsed.

Charlie is Jeremy's opposite in a lot of ways, he doesn't have the Jeremy's outgoing confidence and instead is rather shy and introverted. He has trouble interacting with people and has been surprised by the way the whole team have welcomed him when his own father (their commanding officer) practically disowned him because he was gay. Charlie has been through a lot, first being kidnapped and then having a finger amputated as he was drawn into this whole conspiracy alongside his sister. He's been a valuable asset thanks to his computer skills though and is enjoying being part of the team.

It has been obvious for some time that a bond was forming between Jeremy and Charlie so I was really looking forward to their story. The covert glances they've shared along with a strong friendship that has been growing gave me very high hopes but unfortunately it didn't quite live up to my expectations. It's not a bad book by any means but the romance wasn't quite what I hoped for. I think the main issue was how quickly things moved between them, they went from warily circling each other to having sex at every opportunity to I love you and let's live happily ever after within about 24 hours and it just didn't come across as completely believable. They have undeniable chemistry and the sex was definitely hot but I think the emotional connection was missing until right at the very end of the story. I think if the story had been a little longer and there had been more time for conversation in between all the sex I would have enjoyed it so much more.

We get a chance to catch up with the rest of the team though and see the immediate aftermath of the explosion. There is an interesting new animal addition to the Hard Ink family and I enjoyed the banter between Beckett and Kat who are the main couple for the next (and final) book Hard to Let Go. I am really enjoying this series and I have to give kudos to both Laura Kaye and Avon for including an MM story in what has so far been a fully straight romantic suspense series. It's great that stories like this one are becoming more mainstream and I hope that trend continues.