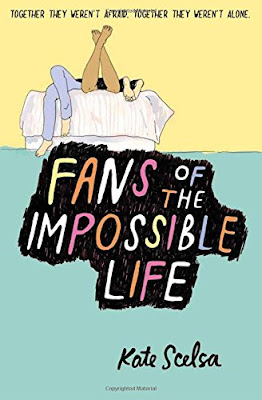 "May we live impossibly," Sebby said when he opened his eyes. "Against all odd. May people look at us and wonder how such jewels can sparkle in the sad desert of the world. May we live the impossible life."

Mira is trying to pretend that she's a fully functioning human - rather than a girl who can't get out of bed for days on end.

Jeremy is a painfully shy art nerd in self-imposed isolation after an incident that ruined his last year of school.

And Sebby is the charming gay foster kid who seems to carry sunlight around with him.

For Jeremy, it's as if he has always been expecting Sebby, though they've only just met.

For Mira, she finally feels awake when she's with him.

But Sebby has his own secrets. And it's only together that the three of them can fix their broken selves - and live their impossible lives . . .

Review:
I had such high hopes for Fans of the Impossible Life, the tag line "The story of a girl, her gay best friend and the boy who falls in love with both of them." caught my attention the moment I saw it and I was expecting some kind of epic bisexual love triangle or possibly even a relationship that developed between all three main characters. I'm not usually a fan of love triangles but I would definitely put my irritation to one side for a story like that! Unfortunately that isn't what this story is about so I ended up feeling incredibly disappointed. I don't think that's necessarily the author's fault but whoever was in charge of writing that marketing tag line definitely did the book a disservice. Hopefully if you go into it without that same expectation you'll end up enjoying the story much more than I did.

This book is told from three different points of view which should really allow us to get to know all of the main characters but for some reason I never really connected with any of them. The POVs of Mira and Jeremy weren't too bad but the way Sebby's sections were written was completely jarring and the left me feeling completely disconnected from anything that happened to him. His POV should have been the one that moved me most, he was really going through some very tough times, but I felt so distanced from him that I didn't even come to like him that much and I struggled to see why both Mira and Jeremy were so drawn to him. He was supposed to be the brightest character, someone they both adored, but I just didn't feel it.

I didn't really believe in the romance either which was incredibly disappointing. The most realistic relationship was the friendship that developed between Mira and Jeremy, I really felt like they cared about each other and were there for each other but I didn't feel any chemistry or romantic love between them. Sebby was a bit too distant and the way he kept so many secrets and held the others at arms length just didn't work for me. There was also one particular scene between the three of them (possibly the scene that was inspiration for the tag line) that made me feel really uncomfortable, it never quite felt that all three of them were on board with what was happening and it seemed more like their actions sprung from too much alcohol rather than any real desire they felt. I was also uncomfortable about the actions of a certain teacher, he doesn't exactly do anything wrong but he definitely oversteps boundaries and I was extremely upset by the way things played out when they turned to him for help with a major problem they were having. It felt a bit like it was sending a message to teenagers saying that going to an adult for help is just going to make matters worse so you're best off keeping silent and I don't think that's a helpful message to give.

I have to give Kate Scelsa kudos for having such a diverse cast of characters though and she really does touch on some difficult issues. We get some interesting insights into drug addiction, living in foster care, coping with mental health issues, coming from a mixed race family, having two gay parents and even questioning your own sexuality and I definitely enjoyed that about the story. Unfortunately the rest of the story fell flat and it didn't really feel like any of them had achieved much by the end of the book, I was hoping to see them grow up and become more comfortable in their own skins but I was left feeling that they were right back where they started only this time they had become codependent on each other for their survival.